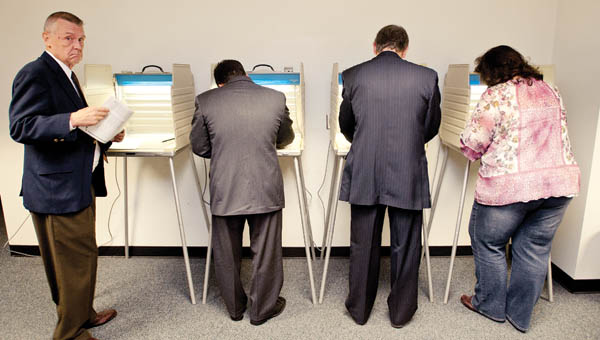 The first day of absentee voting brought out a record number Tuesday to the board of elections’ office at the Lawrence County Courthouse as an earlier Columbus directive pushing for the early voting has put a strain on the local election office’s budget.

Starting this summer Secretary of State Jon Husted’s office sent out in two mailings 6.9 million applications for absentee ballots. As of Friday local elections boards across the state had received close to 1 million of those back.

In Lawrence County, as of Friday, workers at the county election board have processed more than 3,200 applications for absentee ballots, or more than three times the amount of applications this time four years ago, according to elections board director Cathy Overbeck.

On Tuesday at 2 p.m. that translated to 46 people wanting to vote at the courthouse to avoid the rush on Nov. 6.

“Normally we may average seven or eight a day,” Toni Stevens, deputy director, said. “It has been steady all day long.”

Because of Husted’s directive, elections boards were told that they should expect to process at least 50 percent more absentee ballot applications than they did in the presidential election of 2008.

“It is coming true, so far,” Overbeck said. “The sheer volume has created a need for extra man hours. We are having way more (applications) than we have had before. Usually it may be 1,000 that we are getting prepared for.”

Not only have more applications ramped up the number of hours workers are putting in. But the hours for early voting have been extended through Nov. 2.

Voting hours at the courthouse are now 8 a.m. to 5 p.m. this week Monday through Friday. Then those hours wil be extended as Election Day nears.

Those factors sent Overbeck to the county commission recently wanting $100,000 more that what was originally appropriated for the election board budget. A month ago, the commission OK’d $50,000 and appropriated the second $50,000 two weeks ago.

“We have four part-time (workers) and we are making it work with the four,” Overbeck said. “But it is blowing our budget. I hate having to ask for extra. The sheer volume is causing us to have to implement that.”

Bringing another avenue for job creation into the region is the purpose of the newly formed Appalachian Partnership for Economic... read more