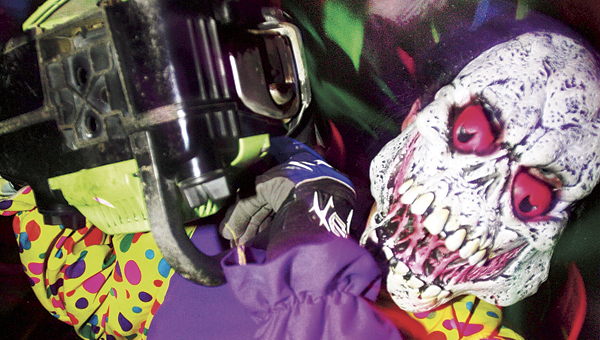 Each October an ordinary-looking hillside in Ironton is transformed from historic locale to haunted attraction.

The Ironton Lions Club’s Haunted Tunnel opens Friday and will be open Fridays and Saturdays in October.

Those who think Ironton is not a tourist destination may want to talk to Lions Club member Lou Pyles, one of those club members who work each year to make sure the trip through the old tunnel is, well, frightfully fun.

“We have over 2,000 people,” Pyles said. “They come from Mt. Sterling (Ky.,) they come from Morehead (Ky.) from Cincinnati, from Columbus. We draw them in from all over.”

This year’s tunnel has several changes from the 2011 edition.

The civic organization has converted the former State Route 75 highway tunnel into a Halloween attraction each October for nearly two decades.

As the largest fundraiser for the volunteer group, all proceeds go back into the community through a variety of civic projects and support to other area organizations such as Ironton In Bloom, the Ironton-Lawrence County Memorial Day Parade Committee, the Ironton City Welfare Mission and others.

One key project, which meets the Lions International focus of working to help those who are vision impaired, is to provide a service dog to someone who couldn’t afford one otherwise. The club has sponsored three dogs in recent years, each at a cost of more than $8,000.

In June 2011, vandals broke into the tunnel and destroyed several rooms, stole wiring and vandalized what was left of the attraction. Lions Club members worked all summer to repair the damage and replace what had been taken. The result of all that work was an improved attraction. The improvements have continued this year.

The Haunted Tunnel is located near the U.S. 52 and State Route 93 intersection across from the Ironton Hills Shopping Center. Doors are open from 7 to 11 p.m. The cost is $5 per person.

Calling all mummies… and daddies: Trick or Treat nights and times have been set in many local communities. Those who... read more