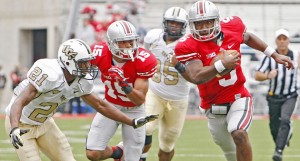 Ohio State Buckeyes’ quarterback Braxton Miller (5) runs for yardage against Central Florida. Miller will be the key as the Buckeyes host Nebraska on Saturday in a pivotal Big Ten game. (MCT Direct Photo)

COLUMBUS (AP) — It was a game that went into the Nebraska record books — and the Ohio State memory banks.

The Cornhuskers mounted the biggest comeback in school history a year ago, finishing with a 24-0 flurry to erase a 21-point, second-half deficit, to beat the Buckeyes 34-27 in the first Big Ten game ever played in Lincoln, Neb.

It’s a new year but Ohio State hasn’t forgotten. Heading into Saturday night’s showdown at Ohio Stadium, a number of the 12th-ranked Buckeyes believe some payback is due to the No. 21 Cornhuskers for what happened then.

“I have heard them talk,” said Ohio State coach Urban Meyer, who wasn’t around for last year’s wild, up-and-down struggle at Memorial Stadium. “I haven’t brought it up. But I hear them say that ‘We owe this team.”’

It’s clear that the Buckeyes have taken note.

“It’s a looooong flight,” safety Bradley Roby said of the return trip after a road defeat like the one at Nebraska. “I went through it last year. It’s not fun at all. So that’s what we’re trying to send them back with.”

Funny, but at halftime the game appeared to be a high point for the Buckeyes, who were muddling through a transitional season after Jim Tressel was forced out for knowingly playing ineligible players. Several Buckeyes were suspended for the Nebraska game because of NCAA violations and the final sanctions had yet to be handed down.

Assistant Luke Fickell was serving as interim coach, Ohio State had a true freshman quarterback in Braxton Miller playing every down and there was a feeling that the season could go either way.

When the Buckeyes bolted to a 20-6 halftime lead, quieting a crowd of 85,426, it appeared that perhaps the program might be able to weather the storms battering it from outside and within and still have a successful season.

But then Miller went down. He had completed 5 of 8 passes for 95 yards, including a 32-yard touchdown pass to Jake Stoneburner, and had run for 91 yards on 10 carries. Everything seemed to be clicking until he sprained his right ankle and wasn’t able to return.

“We had a good game plan, things went well, and in the second half I just messed up my ankle,” Miller recalled.

Asked if he felt the game shifted at that point, he nodded and said, “Yeah.”

It wasn’t just the players who felt that way. Mike Vrabel, then and still a defensive assistant coach, felt the momentum shift.

“Our quarterback went down and our guys on defense felt like that was going to be it — they said that after the game,” Vrabel said. “We were getting stops and forcing them to kick field goals and then things just started to steamroll and pile up on you. And there was not a play to be made to stop anything.”

Fifth-year senior Joe Bauserman came on but things had changed. Nebraska’s Blackshirts defense was now much more active, much more inspired. The crowd was back in the game. And Huskers quarterback Taylor Martinez, booed late in the first half, regained his footing.

Martinez ran for a touchdown and passed for two others and running back Rex Burkhead exploded to total 119 yards on 26 carries, catching one scoring pass from Martinez and also adding the go-ahead touchdown on a 17-yard run with 5:10 left.

Bauserman went 1 for 10 passing for 13 yards with an interception, meaning he completed as many passes to Nebraska players as he did to Ohio State’s. He was unable to lead a final drive to tie the game.

The video from the Oct. 8, 2011, game rivals a horror flick for the Buckeyes.

“We look at those things and try to get, not revenge, but not let anything like that happen again,” linebacker Ryan Shazier said.

Despite falling to 0-2 in the Big Ten with the loss, the Buckeyes regrouped to win their next three games but then closed what would be a 6-7 season — their most losses since 1897 — with four consecutive defeats.

Even though the entire season didn’t tilt on that one, cool Saturday evening in Nebraska, many of the Buckeyes believe it did.

“Last season as a whole is brought up more than just one single game,” offensive tackle Jack Mewhort said. “The Nebraska game was part of it, just the way it happened and we let the lead go. It adds a little something and gives you a little more of a chip on your shoulder.”

Nebraska coach Bo Pelini and his players barely mentioned the game this week.

But the Buckeyes are well aware of what happened.

“Last year was last year. I’m not going to forget it, but I’m not going to dwell on it either,” Ohio State linebacker Etienne Sabino said. “But we’re looking forward to this game this week.”