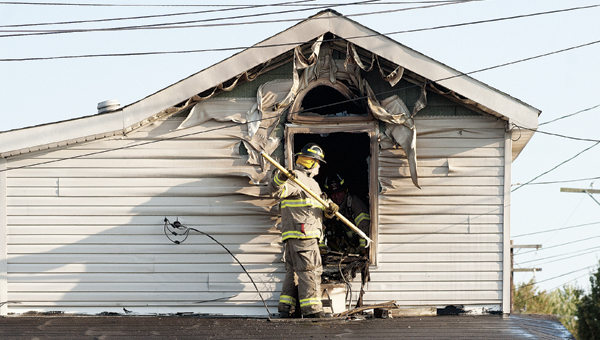 The State Fire Marshal’s Office has been called in to help with the investigation of a fire that severely damaged an Ironton apartment Thursday evening. Ironton Fire Chief Tom Runyon said an apartment on the alley at 312R S. Eighth St. caught fire at 5:14 p.m.

“Several people in the neighborhood reported an explosion, a dull thump that shook the area and this is consistent with what we’re seeing,” Runyon said.

The apartment is owned by Park Avenue Development LLC and was vacant at the time of the fire. The former occupants were in the process of moving out and the electricity had already been shut off, Runyon said.

No one was in the apartment at the time of the fire. There was no injury to firefighters, Runyon said.

Runyon said there was “mild roofing damage” to a nearby residence.

Runyon said the cause of the fire is still under investigation.

Message from annual community event   The purple and white balloons floated up to the early evening sky at the... read more