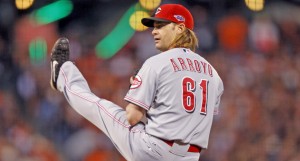 SAN FRANCISCO (AP) — Bronson Arroyo pitched the Reds back to Ohio on quite a playoff roll.

Arroyo retired his first 14 batters and delivered a gem a day after 19-game winner Johnny Cueto went down with a back injury, and Cincinnati beat the San Francisco Giants 9-0 on Sunday night to head home with a 2-0 NL division series lead.

A pair of Ryans provided the big hits. Ryan Ludwick connected leading off the second inning for his first career playoff homer and Ryan Hanigan hit a two-run single in the fourth and a later RBI single. Jay Bruce added a two-run double and Joey Votto had three hits in his first multihit postseason game.

“Coming on the road, you think about getting one as a success and victory,” Bruce said. “To be able come here and get two is very important.”

Former San Francisco skipper Dusty Baker came into his old stomping grounds by the bay and left with two commanding victories 10 years after managing the Giants within six outs of a World Series title before falling short.

Game 3 in the best-of-five series is Tuesday at Great American Ball Park. Homer Bailey (13-10), who pitched a no-hitter Sept. 28 at Pittsburgh, takes the mound as the Reds try to close out the series against Giants right-hander Ryan Vogelsong (14-9).

The Reds won their first playoff game in 17 years by taking Game 1 without their ace Saturday night, and now they’re going back home looking for their own sweep after the Phillies eliminated them in a frustrating three-game first round two years ago.

“You’re not comfortable at all until it’s over,” Baker said. “We’ve been there before. It’s hard to take the last breath out of anything.”

The Reds will try for their first postseason sweep since beating the Dodgers in the first round in 1995. Cincinnati got swept in the NL championship series that year by Atlanta to start what became a seven-game postseason losing streak before Saturday’s win.

The shaggy-haired Arroyo, the right-hander with that high leg kick slightly resembling the familiar motion of Giants Hall of Famer Juan Marichal, went untouched before Brandon Belt’s two-out single to the gap in right-center with two out in the fifth. San Francisco didn’t get another hit until Pablo Sandoval lined a double off the right-field arcade with two outs in the ninth.

“You hate to get beat like that, especially at home,” Giants manager Bruce Bochy said. “It happened. We know where we’re at right now. We know our backs are to the wall. We have to come out and be ready to play once we get to Cincinnati. I know they know what’s at stake. They’ve done a great job all year bouncing back.”

The 35-year-old Arroyo worked ahead and had four straight strikeouts during one stretch to baffle the Giants.

Arroyo’s seven innings marked his longest postseason outing in five starts and 13 appearances — and he couldn’t have picked a better moment to do it.

Cueto threw all of eight pitches in Saturday’s 5-2 win before leaving with back spasms, and Mat Latos and a patchwork pitching staff handled the rest.

Baker said he picked Arroyo for Game 2 here in part because the righty is susceptible to giving up home runs after he allowed 26 this year. And AT&T Park is “one of the most forgiving ballparks in baseball.”

Arroyo thoroughly outpitched Madison Bumgarner to beat the Giants for the first time since 2008. He had gone 0-2 with a 2.42 ERA in four starts since, getting two no-decisions facing San Francisco this season.

And he took the hard-luck loss in Game 2 against the Phillies in 2010 as the victim of a blown save.

Boy did he give the bullpen a break with this masterpiece.

“A no-hitter in this type of environment is nearly impossible,” Arroyo said. “A win for the ballclub is the pinnacle, nirvana.”

Bumgarner had pitched a one-hitter June 28 against the Reds at home, but was nothing close to that dominant this time.

The last time Baker managed in a playoff setup like this season — with the higher seed opening on the road for the first two games — he was on the other end. In 1997, while managing the favored Giants, San Francisco lost the first two games in Florida and the Marlins completed a three-game sweep of the NL division series at Candlestick Park en route to the World Series title.

Baker has felt good about these Reds all along, even more so after recently missing 11 games while recovering from a mini-stroke, including when they clinched the NL Central.

“He’s kind of the heartbeat of this team,” Bruce said. “To have him back for the last series and starting the playoffs, especially in San Francisco, where he obviously has a ton of history and is a storied manager here, it’s good. It gives us a vibe that’s pretty easy to play for.”

He is getting contributions from throughout his lineup and a ready-for-anything pitching staff.

On Saturday, it was Brandon Phillips with three hits and a two-run homer and Bruce with a solo shot. The Reds added on late in Game 2 against the Giants’ typically reliable bullpen with Bruce’s eighth-inning double, a run-scoring triple from Drew Stubbs and an RBI single by Phillips.

Ludwick, who came in just 1 for 16 lifetime against Bumgarner, silenced the orange towel-waving sellout crowd of 43,505 AT&T Park in a hurry when he sent the first pitch of the second inning over the center-field wall.

The Reds sure made the Giants’ pitcher friendly ballpark feel longball friendly the way they hit in these two games.

Many of the fans quickly made for the exits after the Reds went ahead 6-0 on Bruce’s two-run double in the eighth.

Tim Lincecum entered in relief for the Giants in the top of the sixth trailing 4-0. The two-time NL Cy Young Award winner, whose rocky season kept him out of the playoff rotation, pumped his fist after striking out Hanigan to end the sixth before a scoreless seventh.

Lincecum pitched the Giants’ Game 5 World Series clincher two years ago at Texas as the franchise won its first championship since moving West from New York in 1958.

Bumgarner had his own postseason milestones to lean on as he came into another playoffs.

The left-hander was the Game 4 World Series winner against the Rangers on Halloween 2010. When Bumgarner earlier beat the Braves in Game 4 of the division series, he became the youngest pitcher in franchise history to win a postseason game at 21 years, 71 days old.

NOTES: Arroyo had never gone six innings in the postseason before Sunday. … San Francisco was shut out six times during the regular season, tied for second-fewest in the NL with Philadelphia. … Cueto returned to Cincinnati along with Bailey. … 2010 World Series MVP Edgar Renteria threw out the ceremonial first pitch and stopped by the clubhouse. “I’m very touched,” he said. “The fans, they remember and appreciate everything. I’m never going to forget this time. They still remember what we did in 2010. It’s unbelievable.” … 49ers Hall of Fame QB Joe Montana also was in the stands, along with actor Charlie Sheen — who received big boos as a Reds fan.

Cornerback Adam Jones (24) of the Bengals is pushed away by tight end Anthony Fasano of the Dolphins in the... read more