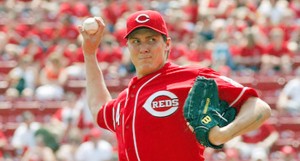 Cincinnati pitcher Homer Bailey will try to clinch the NL division series when he starts against the San Francisco Giants. (Courtesy of The Cincinnati Reds)

CINCINNATI (AP) — Homer Bailey played catch in the sun-splashed outfield at Great American Ball Park, his usual routine the day before a start. Nothing different at all, as far as the Texan let on.

“You guys,” he said afterward, “it’s just another game.”

Uh-uh. Not buying it. Everyone knows the Cincinnati Reds pitcher has a chance to exorcise a lot of bad postseason history — or add to it — with his next start.

Less than two weeks after he threw the 15th no-hitter in the history of baseball’s first professional franchise, the 26-year-old Bailey has a chance to add another career moment. He can complete a division-series sweep of the San Francisco Giants on Tuesday night.

Up 2-0 in the series, the Reds need one more victory to advance, with as many as three chances left at home. It’ll be a breakthrough if they get it.

Cincinnati hasn’t won a home playoff game in 17 years, a span of futility etched into the franchise’s storied history. Everyone remembers the Big Red Machine winning back-to-back World Series in 1975-76. The 1990 Nasty Boys team swept Oakland to win another.

Since then? Little more than heartbreak. Got swept by Atlanta in the 1995 NL championship series under manager Davey Johnson. Lost a one-game playoff for the NL wild card to the Mets in 1999 at Riverfront Stadium. Got swept by the Phillies in the first round two years ago.

“I had this one kid give me a sweatshirt that said, ‘The Year of the 12,”’ said manager Dusty Baker, who wears the uniform number. “He gave it to me in spring training. I believe in that. I’m only going to see one ‘12 while I’m living. It’s a special year. I just feel that it’s our year.”

Their first shot at it will make major league history.

The Giants and Reds both had pitchers throw no-hitters during the season — Matt Cain had a perfect game for San Francisco. When Bailey starts on Tuesday, it’ll mark the first time that a playoff series featured two pitchers with no-hitters in the same year on opposite teams, according to STATS LLC.

The Reds put themselves in position for a sweep by overcoming the loss of ace Johnny Cueto to a bad back in the first inning of the opener, then pulling out a 5-2 win. They won 9-0 on Sunday night behind Bronson Arroyo’s seven crisp innings, then tried to get a few hours of sleep on the overnight flight back to Ohio.

“I slept on the plane, got here, got my stuff, got breakfast (at a restaurant) and went back to bed, slept a couple of hours and made myself get up,” outfielder Drew Stubbs said. “Not an ideal amount of rest, but hopefully I get to catch up on it tonight.”

Stubbs, Bailey and a few other Reds showed up at the ballpark in the afternoon for a light workout. Stubbs ran a few pass patterns as players threw a football on the field.

The Giants stayed overnight on the West Coast and flew in during the afternoon, trying to get a little needed sleep in their own beds. Probably wasn’t very restful — only four teams have overcome a 2-0 deficit in the division series round.

San Francisco manager Bruce Bochy has decided to start right-hander Ryan Vogelsong (14-9) against Bailey (13-10), who will be making his first appearance at Great American Ball Park since his no-hitter in Pittsburgh on Sept. 28.

Bailey followed the no-hitter with four shutout innings in a 1-0 loss in the final game of the season at St. Louis, an easy outing to save him for the playoffs. He led the NL with a 2.32 earned run average on the road this season, but is only 18-19 with a 5.13 career ERA at Great American.

It’ll be the first time Reds fans get to recognize him for the no-hitter — not that he’ll notice.

“I will probably be somewhat oblivious to it, just like any starter on game day,” Bailey said. “Unless there is a streaker running across, you don’t pay attention, you’re just focused on what you’re doing.”

Bailey will be well-rested. He flew home with Cueto on Sunday, got home and watched the last few innings of the Reds’ win on television.

It’ll be Baker’s first game back in Cincinnati since Sept. 12. He was hospitalized while the team was in Chicago for an irregular heartbeat and a mini-stroke. He rejoined the team for the final series in St. Louis, then flew to the West Coast and got an ovation when introduced before the first playoff game.

Baker was still in a Chicago hospital bed when the Reds clinched at home on Sept. 22 — players toasted him in the clubhouse before spraying each other. He was in Cincinnati resting when Bailey threw his no-hitter in Pittsburgh.

He’ll get another ovation when he’s introduced on Tuesday night, though it’s nothing he’s anticipating.

“I didn’t think about getting a reception in San Francisco,” the 63-year-old manager said. “I’m just doing my job.”

CINCINNATI (AP) — Third-and-1. Third-and-2. Might as well be third-and-50. The Bengals are at their worst on the most important... read more