Top-ranked Hartley yet another tough task for Fighting Tigers 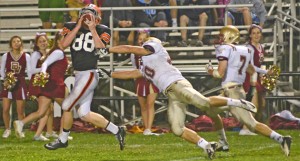 The Ironton Fighting Tigers are going from the frying pan into the fire.

Now the Fighting Tigers are preparing to host the Columbus Bishop Hartley Hawks at 7:30 p.m. Friday.

Hartley is 7-0 and ranked No. 1 in the Associated Press Division IV poll. They routed Fort Wayne (Ind.) Bishop Luers 40-7 last week. Bishop Luers is now 5-3 on the season.

Despite their record, Hartley is second in Region 14 due mainly to a schedule that has a combined record of 24-26. Only Akron Archbishop Hoban (42-10) and Watterson (28-14) have scored more than one time against the Hawks’ defense.

Hartley won last season’s meeting 34-16. However, the Hawks scored three times on runs of 24 or more yards and had 397 total yards. Ironton managed 243 total yards of its own and was hurt by three turnovers that included a fumble and two interceptions.

“We can’t play the game in awe of them. We beat them two years ago and had a chance to beat them a second time,” said Vass.

“Last year we were in the game and we didn’t play well. We just have to work hard, toughen up and come ready to play and see what happens. There’s no doubt they’re a good team. They may be better than last year.”

The Hawks are predominantly a running team but can throw when needed.

Ja’Waun Woodley — headed to Toledo to join former Hawks’ teammate Noah Key — leads the team with 114 carries for 979 yards and 12 touchdowns. Marcellus Calhoun is the other half of the dynamic duo with 103 carries for 756 yards and 14 scores.

Brandewie throws the ball around to his receiving corps. Dominique Scott (5-8, 1654) has seven catches for 244 yards and three TDs, Jacob Matuska — a Notre Dame recruit — has eight grabs for 151 yards and three scores, slot back Alonzo Saxton four receptions for 229 yards and two touchdowns, and Woodley three catches for 39 yards.

Saxton (5-11, 175) is the grandson of Tino Ball who was a catcher on the 1972 Ironton baseball state championship team.

Vass said the Hawks are equally as good on defense.

“They have great speed and fly to the ball. There really isn’t a weak spot anywhere,” said Vass.

The Cincinnati Reds' Brandon Phillips (4) reacts after being tagged out at third base by the San Francisco Giants' Pablo... read more