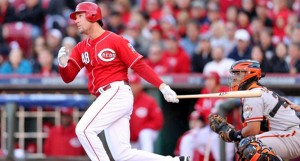 Cincinnati’s Ryan Ludwick watches the flight of the ball as he hits a solo home run during Wednesday’s Game 4 of the National League Division Series. San Francisco beat the Reds 8-3 to end the series at 2-2. (Photo Courtesy of The Cincinnati Reds.Com)

CINCINNATI (AP) — Angel Pagan connects on the second pitch of the game. A Giants team that finished last in homers goes on to hit three. Tim Lincecum pitches like a two-time Cy Young winner — this time, out of the bullpen.

So many unusual things moved San Francisco to the verge of an unprecedented comeback.

Pagan hit the first leadoff homer in Giants postseason history, and Gregor Blanco and Pablo Sandoval connected later for an 8-3 victory over the Cincinnati Reds on Wednesday that evened their NL division series at 2-all.

No team has recovered from a 2-0 deficit in a best-of-five series by winning three on the road, according to STATS LLC. This one can do it with a victory on Thursday at Great American Ball Park.

“Thanks to the win today, there will be a tomorrow,” Pagan said. “And we are ready for that.”

Matt Cain, who lost the series opener and has yet to beat the Reds in three tries this season, will start Game 5 against Mat Latos.

One thing in the Reds’ favor — they haven’t dropped three straight at home all season.

“I’d like to think that we still have the advantage,” Reds outfielder Jay Bruce said. “We’re at home. I expect Mat to come up with a big game. I’m looking forward to it.”

So are the Giants, who were down after losing the first two games at home while getting outscored 14-2. They were barely able to get a hit, let alone a win.

The pressure pulled them closer. Hunter Pence gathered them for inspirational speeches before the two games in Cincinnati, challenging them to play like champions.

“We feel good,” NL batting champion Buster Posey said. “When you’re down 0-2 you see what you’re made of. We’re not done.”

It wasn’t all about the offense. San Francisco’s overlooked Cy Young winner played a starring role, too.

Lincecum was relegated to the bullpen for the playoff series because of his dreary season — 15 losses, 17 wild pitches. He entered in the fourth inning, pitched out of a threat that kept the Giants up 3-2, and kept going. The right-hander struck out six while allowing just one run in 4 1-3 innings.

“I knew he would play a huge role in this,” manager Bruce Bochy said. “And I know of other situations where starters have been in the ‘pen and really done a great job to help their team win. We knew Timmy would play a critical role in the series like he did tonight.”

The Reds were hoping to start ace Johnny Cueto, but had to drop him off the roster a few hours before Wednesday’s first pitch because he was still bothered by a strained muscle in his right side. He won’t be available if Cincinnati wins Game 5 and reaches the NL championship series.

The way the Giants have started hitting, that’s now in doubt.

San Francisco managed only four runs in the first three games of the series. The Giants avoided the sweep by pulling out a 2-1 win in 10 innings on Tuesday night with the help of a passed ball and an error by third baseman Scott Rolen.

They broke out against Mike Leake, who replaced Cueto and had a rough time. Leake threw his first career complete game in San Francisco on June 29 and was 3-0 career against the Giants.

Pagan homered to start it off for the Giants. Blanco hit a two-run shot in the second. The Giants had another breakthrough in the fifth, when back-to-back doubles by Joaquin Arias and Pagan ended an 0-for-14 slump with runners in scoring position during the series.

Sandoval’s two-run shot in the seventh made it 8-3, matched the Giants’ season high for homers and drew loud boos from the crowd of 44,375 — the third-largest at Great American Ball Park. Fans quietly settled into their seats and used their white rally towels as lap warmers against the evening chill.

The Giants normally don’t hit many homers — only 103 during the season, fewest in the majors. They’re only the seventh team since 1900 to reach the playoffs after finishing last in the majors in homers.

While the offense went to work, Lincecum bailed out the bullpen.

Bochy didn’t hesitate to put the guys he wanted on the mound, using four pitchers in the first four innings. Lincecum settled things down, giving up only two hits in his second relief appearance of the series.

He threw 42 strikes out of 55 pitches and even batted twice — just like a starter.

“The last two games, it’s been about scratching and leaving it on the field,” Lincecum said.

Bochy decided to go with left-hander Barry Zito over Lincecum for Game 4 because he was better down the stretch. Zito was left off the postseason roster when San Francisco won the World Series in 2010, but finished the regular season with seven straight wins.

The left-hander lasted only 2 2-3 innings, his shortest career outing in the postseason. On came Lincecum to save the day.

The Reds finished with the second-best record in the majors at 97-65, one game behind Washington. The rotation was the foundation of their championship season, with all five starters making it through healthy — a franchise first.

Things changed dramatically when Cueto had to leave the first inning of the playoff series opener on Saturday with the injury. The Reds made it through that game with Latos filling in for a 5-2 victory, but couldn’t win without him on Wednesday.

NOTES: The Reds honored RHP Homer Bailey on the field before the game for his no-hitter in Pittsburgh on Sept. 28, presenting him and C Ryan Hanigan with framed photo montages. … It was Zito’s shortest outing since he lasted 2 1-3 innings on Aug. 29 at Houston. The Giants won it 6-4. … San Francisco has won each of Zito’s last 12 starts. … Leake lasted 4 1-3 innings, giving up six hits and five runs. … The Giants hit three homers in a game eight times during the regular season.

CINCINNATI (AP) — Cincinnati’s ace is out of action. His replacement let the Reds down on Wednesday. Now, they are... read more