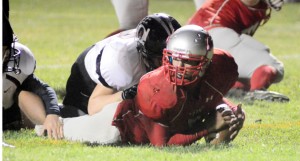 IRONTON — The unbeaten Columbus Bishop Hartley Hawks erupted for 35 points in the second quarter to blow the game open as they beat the Ironton Fighting Tigers 62-6 on Friday.

Ironton (5-3) got within 14-6 on a 16-yard scoring pass from Tristan Cox to Patrick Lewis with 1:37 left in the first quarter, but the Hawks scored 35 points in the second quarter to pen up a 49-6 halftime lead.

WILLOW WOOD — The Oak Hill Oaks took advantage of Symmes Valley mistakes as they beat the Vikings 28-14 in a showdown for first place in the Southern Ohio Conference Division I.

The Vikings (6-2, 2-1) were guilty of six turnovers and had two touchdowns called back on penalties including a 70-yard kickoff return by Alec Herrell.

Quarterback Tyler Rowe led the Vikings with 106 yards and two touchdowns on 15 carries. He also threw for 48 yards.

The Hornets led 16-8 at the half. They got touchdowns of 10-yards from Brandon Hogsten and a 1-yard run by Estep.

Tyree Ceasar had 53 yards on six carries for the Dragons who ran 51 plays to 76 for Coal Grove.

Jones had scoring runs of 29 and 35 yards and also returned and interception 66 yards for a touchdown in the third quarter.

BIDWELL — The Rock Hill Redmen picked up their first win of the season by beating the River Valley Raiders 28-6 in an Ohio Valley Conference game on Friday.

The Redmen did not throw a pass.

SOUTH POINT — For the second time in recent months, authorities arrested people after a drug raid at the Southern... read more