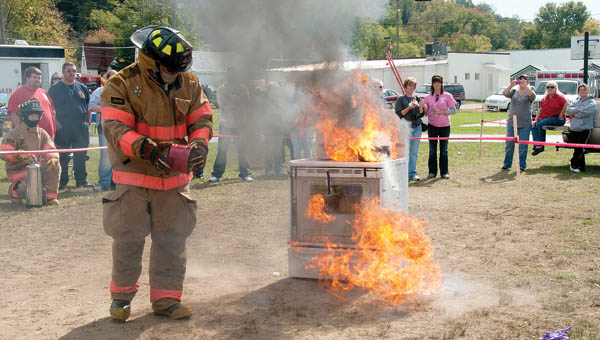 A member of the Coal Grove Fire Department shows what to do when grease catches fire.

COAL GROVE — When homes and structures catch fire, quick response from the local fire departments can make all the difference in saving lives and minimizing damage.

So just how long does it take for a firefighter to suit up?

Saturday, the Coal Grove and Upper Township VFDs hosted their fifth annual safety day and members from local departments went head-to-head to see who could suit up the fastest. During the relay, each firefighter must completely suit up, from boots to helmet, and be breathing with their air tank.

Haukedahl, a 22-year-old, two-year veteran of the Coal Grove department made his fellow firefighters proud: His victory was the first for the department since the Firefighter Challenge was started five years ago.

“This is the fastest time ever in this relay race and it’s coming home to Coal Grove,” said Jay Sherman, captain of the department.

Previous record holder was J.D. Pancake, chief of the Upper Township VFD, with a time of 1 minute 2 seconds.

Haukedahl said he attributed his quick time to the training he has received from his chief Gary Sherman, as well as the other veteran members.

“Just being fast enough to help save someone makes the difference,” Haukedahl said.

For the next year, the Coal Grove VFD will have bragging rights and possession of the coveted fire helmet trophy, adorned with each year’s winner’s name.

Safety day kicked off with a parade of local fire departments, law enforcements and other emergency units. The event was held at the Dawson-Bryant Schools office field area and demonstrations gave event-goers helpful tips on how to be prepared for a fire and other emergencies.

Firefighters showed how to put out a real grease fire on a stove.

“The worst thing you can do is panic,” Sherman said to the crowd.

Department members demonstrated what not to do, by dousing the fire with water, which made the flames shoot high. They also showed the proper way to use a fire extinguisher.

The Lawrence County Tactical EMS Squad, Ohio State Highway Patrol and other agencies gave talks and demonstrations and there was a live, mock car crash scenario.

Children were entertained with inflatables and a firefighter obstacle course of their own.

Coal Grove Fire Chief Gary Sherman said he was pleased with this year’s turn out.

He estimated more than 300 people had attended the event.

Mike Roach and Megan the horse make their way around Triangle Park giving carriage rides to people during the annual... read more