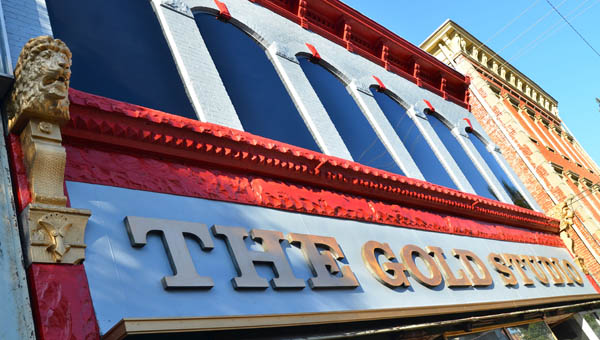 The front of Gold Studio has undergone a facelift for its anniversary.

The dancer’s body erupts from the floor of the abandoned warehouse, floating upward in a world of black, white and cumulous-like wisps of gray, turning peeling plaster on the wall and the geometric line of the human body into an urban landscape.

The image dominates the exhibition room at Gold Studio in Ironton, one of just a couple dozen oversized portraits of teen-agers whose parents probably never had senior cuts like these.

This year Gold Studio is marking its 40th year in Ironton and the man this decade behind the camera is Robert Stevens, the photographer who has been associated with the studio since 1981. Then the studio, founded by the late Bernie Gold, was owned and operated by Kenton Jordan and located on Third Street.

Today the studio is in the former Mearan’s building, Ironton’s one-time premier men’s shop. Earlier this year the front of Mearan’s got a facelift with fresh gold and persimmon paint in honor of the special anniversary.

As he begins to describe the conception of the dancer’s photograph, Stevens apologizes.

“The idea for this came more from something natural,” he said “She wanted something out of the ordinary. I really don’t know…. I’m not much of a talker. I’m more of a hands-on person. That is how I learned how to do this. I express more into my photography. I have a vision, but this is their picture. I’m going to help build on their vision as well.”

Stevens may make his living photographing weddings, family portraits and high school shots, but that was not how he got started in the art. Instead by the time he met his first subjects, they had already given up the ghost.

Some of his first work was documenting autopsies when he was a student at the Ohio Institute of Photography and Technology in Dayton. There he studied biomedical photography or crime scene documentation, as well as portraits and commercial photography.

Those studies came after four years as the student photographer of Rock Hill High School’s yearbook under the guidance of adviser Betty Fisher, who introduced him to the camera.

“Photography appealed to me,” he said. “I grabbed a camera and she thought I had an eye.”

When Stevens came back to Lawrence County, he met up with Jordan, who like Stevens wore a variety of photographic hats from crime scenes to the daily pressure of newspaper work.

One of the major lessons Stevens learned from his mentors was to step out of the picture figuratively.

“We are not here to draw attention to ourselves,” he said. “When I get to a wedding — that is not my day — I don’t want attention drawn to me. This is their portrait.”

CHESAPEAKE — There will be some new faces at a well-loved event in Chesapeake — the annual Chesapeake, Proctorville, Rome... read more