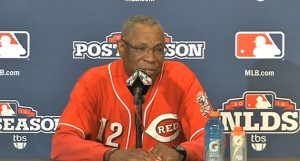 Dusty Baker and the Cincinnati Reds agreed to a two-year contract extension on Monday. Baker has guided the Reds to the Central Division title two of the past three seasons. (Photo Courtesy of The Cincinnati Reds.Com)

The 63-year-old manager got a two-year contract extension Monday, giving him another chance to take Cincinnati deep into the playoffs. They’ve been there twice in the last three years, failing both times to get past the division series.

Baker missed the Reds’ NL Central title celebration this year because he was hospitalized with an irregular heartbeat and a mini-stroke. He returned and lost ace Johnny Cueto at the start of their series against San Francisco, which ended with the Giants rallying to win Game 5.

The team’s first big question of the offseason was whether it would bring Baker back for another try.

“This is Dusty’s team,” Castellini said. “These fellas are poised to go deeper and deeper in the season. To not bring Dusty back or not ask Dusty to come back was out of the question.”

Baker is feeling much better, and the Reds have the nucleus of their 97-win team returning next year, including one of the deepest pitching staffs in the major leagues. When the club offered another two-year deal — same as the last one — Baker quickly agreed.

“I don’t want to leave in a situation where for the rest of my life I would have regretted not coming back with unfinished business. It would have left a real pain in my heart to feel the way I did at the end of the season.”

Baker did one of his best managing jobs this season, guiding the Reds through one major setback after another.

They lost closer Ryan Madson and their two setup relievers to injury during spring training. Baker eased left-hander Aroldis Chapman into the closer’s role, a move that worked beautifully. Joey Votto tore cartilage in his left knee at midseason, costing the Reds their top hitter — he was never the same, even after returning.

Baker juggled his lineup and led the club on a 36-12 tear while Votto was recuperating. With the team on the verge of clinching, Baker ended up in a hospital during a road trip in Chicago. He missed 11 games and returned for the final regular-season series.

The Reds made it through the season with all five starters healthy, a trend that ended in the first inning of the playoffs. Ace Johnny Cueto pulled muscles in his right side on his eighth pitch in San Francisco, sidelining the 19-game winner and putting Cincinnati’s pitching plans in disarray.

Baker got creative with his pitching staff and the Reds won the first two games. With a chance to wrap it up back in Cincinnati, they had a passed ball and an error that let the Giants rally for a 10-inning win in Game 3. The Giants completed their comeback on Buster Posey’s grand slam to take Game 5.

“We’re moving in the right direction,” general manager Walt Jocketty said. “We’re trying to build a team that will be in contention for a long time and win multiple world championships. One of the things we feel is very important is continuity.

“Every place I’ve been, we’ve always had continuity, whether it’s the scouts, the front office, the minor league people. But most importantly, the guys that are leading the team on the field. If you look, the more successful operations and teams are the organizations that keep continuity in their leadership.”

Baker has presided over a revival in Cincinnati, which was rebuilding when he took over in 2008. The Reds were moving from a team reliant on homers — an offense built around Ken Griffey Jr. and Adam Dunn — to one that wins with pitching and defense.

A young team reached the playoffs unexpectedly in 2010, then got swept by Philadelphia. Baker became one of only six managers to win division titles with three teams, along with Billy Martin, Joe Torre, Tony La Russa, Lou Piniella and Davey Johnson.

Cincinnati took a step back last year, when three starters got hurt or sick during spring training and several players had subpar seasons. They won 90 games again this year, the seventh time one of Baker’s teams has reached the mark.

The overriding question was whether he’d be physically able to continue managing. He’s had an irregular heartbeat since he was a teenager and high blood pressure for years. He’s managing the problems with a change in diet.

“Really his health was never an issue with us and him,” Jocketty said. “The doctors in Chicago and Cincinnati gave him a clean bill of health and said he’d have a total recovery. We’ve seen a quick recovery. Look at him now — he looks happier and stronger than he was even months ago.”

Baker has lost weight, much of it from fluid buildup.

“I can’t wait for spring training,” Baker said. “I feel excellent. I feel I have most of my strength back.”

CLEVELAND (AP) — Scott Fujita may have another fight to win. The Cleveland Browns linebacker, who has spent much of... read more