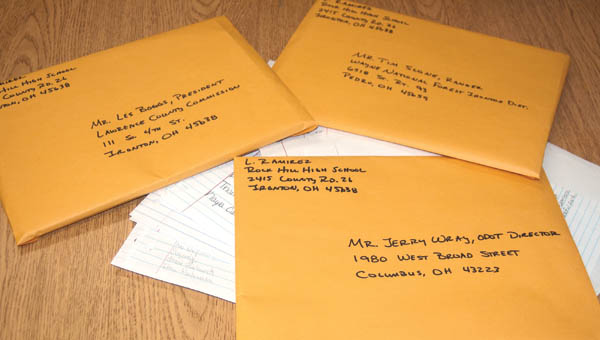 These packets of letters will be hand-delivered to officials today.

PEDRO — A couple of weeks ago Rock Hill High sophomore Emily Jenkins came home with news that made her mother, Lisa Jenkins, burst into tears.

At the end of October Ellisonville Park is scheduled to be shut down.

“She was really emotional about it,” Emily said.

That’s because Ellisonville Park was where Emily’s father Curtis Jenkins asked the then Lisa Kelley to be his bride.

“He proposed to her there,” Emily said. “Closing it made me cry. The fact that it happened there.”

Earlier this month the Ohio Department of Transportation announced plans to close down the park on Oct. 29, demolishing the shelters and restrooms and removing the infrastructure there. The reason is the park, termed a primitive rest area, is no longer used by motorists as much as it once was when it opened in 1939, according to ODOT.

The structure is aging, maintenance is costly and renovation is prohibitive, transportation officials say.

Emily was not alone in her shock that the park may be shut down soon. One of its most vocal cheerleaders is Emily’s English teacher, Lana Ramirez, who lives across from Ellisonville on State Route 93. The news about its closing galvanized the educator to use the prospect as teaching tool for her students.

She gave her students the opportunity to write letters about their views on the closure to the director of ODOT, the president of the Lawrence County Commission and the district ranger of Wayne National Forest, where the park is located. What the students were to write was up to them. They could be for closing the park or write against it.

The result was 100 letters protesting ODOT’s decision and detailing memories each student has of the park from birthday parties to family reunions to band practice.

With each bundle of letters is a cover letter from Ramirez, who for 43 years has been the park’s neighbor.

“The idea of closing this park is, in my view, shocking and no less than tragic,” Ramirez wrote. “For over four decades, I have seen countless motorists and truck drivers stop to rest at the park, heard the laughter of children playing, smelled the charcoal of family barbecues as the aroma wafted into our neighborhood, heard the pleasant chatter of family reunions and birthday parties and enjoyed the cheers of school sports practices echoing through out little valley.”

For the first six years of her life, Kathryn Burge, a student in Ramirez’ class, celebrated each birthday at that park.

“I was shocked,” Kathryn said about the closure. “I think it is definitely used.”

“It will make a dramatic difference,” Brooklynn Kingery said.

Ramirez said she offered her students the chance to write the letters since they are too young to vote or to sign the petitions the county commission is circulating at markets and gasoline stations along State Route 93.

Getting to express his views is one of the reasons Raymond Littlejohn wrote his letter.

“I felt betrayed that they would think about closing it,” Raymond said. “This was something I could do for the betterment of the community.”

Ramirez’s students did more than express their disappointment about the closing. Many, like Madison Summers and Brad Blankenship offered ODOT suggestions for ways to reduce the costs of keeping the rest area open.

“They suggested a unisex bathroom to cut down on maintenance and vending machines,” Ramirez said. “Community service labor to maintain it and the school could adopt the park like ‘Adopt a Highway.’ They were willing to help do the work.”

Putting petitions at the businesses on State Route 93 was the idea of Boggs, who said the students’ letters show the support in the community for the park.

“I think the people of western Lawrence County feel very strongly that Ellisonville Park should remain open and usable for the public,” he said.

Emily Jenkins has a more personal stake in the park. She wants it to remain open so one day she can take her children there to show them where their grandfather proposed to their grandmother.

The cost of health insurance for the county is expected to go up next year. But by how much is... read more