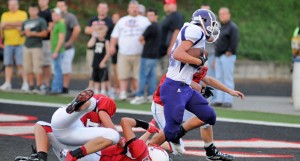 Running back Jacob Collins scores a touchdown. Collins is one of the key offensive weapons for the Chesapeake Panthers as they face the Coal Grove Hornets on Friday. (Kent Sanborn of Southern Ohio Sports Photos.com)

Old habits are hard to break.

For the third straight year, the Chesapeake Panthers and Coal Grove Hornets will meet in a late-season game to determine the Ohio Valley Conference championship.

‘It’s been a tight game the last two years and I expect the same thing this year,” said Chesapeake coach Andy Clark.

Both teams come into the game 3-0 in the league. Coal Grove is 4-3 overall and the Chesapeake is 4-4.

The Hornets close the year against 1-7 South Point and the Panthers face 1-7 Rock Hill.

Clark said he not only expects a similar game, he expects a typical Coal Grove team.

“They’re big up front. They always are. They have speed and size. We’ve got our work cut out for us,” said Clark.

“(Quarterback Alex) Bare is a playmaker, (Brandon) Hogsten and (Isaiah) Gunther and (Tanner) Murphy are all hard runners, they like to throw to (Sean) Paulus and (Conor) Markins, so they definitely have weapons on offense.”

Coal Grove coach Dave Lucas said his team isn’t the only one with talented players on both sides of the ball. He pointed toward quarterback Caleb Lindsey, receiver Javon Thompson and running backs Nate Jones and Jacob Collins.

“They have some good people and some good athletes,” said Lucas. “They have got good speed. They seem to be able to get out and make big play.”

“The key for us in on defense. We can’t let them control the ball like they did to us last year and to Fairland last week,” said Clark. “And when we get the ball, we have to execute. We have to keep them from controlling the ball if we’re going to have a shot.”

Lucas said the key is which team runs the ball best.

“We want to control the ball, but we have to keep them from controlling the ball. But our defense has played pretty well last two games,” said Lucas.

Although a league title is no longer possible, third place is at stake for these two teams. They both need to win their final two games to finish third.

Rock Hill (1-7, 1-2) is coming off its first win of the season after beating River Valley 28-6. Besides Fairland, Redmen face Chesapeake in their final game.

The Redmen ran for 418 yards and did not attempt a single pass. Shane Harper ran 25 times for 232 yards to lead the offense.

South Point (1-7) has shown some offensive life and will be a challenge for a Raiders’ defense that has allow 319 points this season including 135 in three league games — a 45 points per game average.

River Valley (1-7) relies on running back Kyle Brown and has used freshman Dayton Hardway at quarterback the past two weeks.

This will be a battle for second place in the Southern Ohio Conference Division I race.

The Vikings are 2-1 and the Titans 1-1 in the league. Both are 6-2 overall. The Titans final league game is against Sciotoville East.

Besides second place being on the line, securing a higher seed in the Division VI Region 23 postseason playoff computer ratings lies in the balance. Symmes Valley is sixth in the region and Notre Dame is seventh. A win would not only clinch a playoff berth but could help toward getting a home game.

They have instant replay in the SOC.

When Green and East couldn’t find a game in week three, the teams met at East with the Tartans beating Green 40-20.

East quarterback Justin Crager ran for 384 yards on 25 carries and scored four touchdowns. The Bobcats hope their first look at Crager will help their defense slow down the main weapon in the Tartans’ offense.

Every Second Counts: Anyone who left the Defiance-Lima Shawnee game early is kicking themselves. After Jaylin Thomas ran for a... read more