Boren volunteers to switch from fullback to linebacker 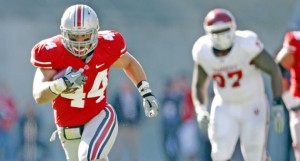 The search ended when Zach Boren turned himself in.

Injuries, departures and disappointing play led Ohio State’s coaches to look for somebody — anybody — to help out at linebacker.

They got a volunteer — their starting fullback.

“It was kind of a test for the first four periods of practice that I watched,” Meyer said of the trial period a week ago when he first tossed Boren into the mix on defense to see what would happen. “He changed the entire dynamic of practice, because so much of playing football is the leadership value. Who is the tough guy on the defense?

“Who is the guy that’s going to stand up and take charge?”

Boren was the answer. Now the former star linebacker in high school has made the transition from offense to defense after three years on the other side with the Buckeyes. Not only that, he led the team in tackles in last week’s 52-49 win at Indiana.

He’ll be in the starting lineup — at linebacker, that is — when the seventh-ranked Buckeyes host Purdue on Saturday.

A week ago, he relied on his instincts because he didn’t really know what he was doing.

Meyer and defensive coordinator Luke Fickell were looking for an attitude more than perfection to prop up a defense that has given up yardage and points in clusters. So they tapped Boren to jump-start the defense.

Finally, Boren’s presence didn’t stop the leaks that have resulted in Ohio State plummeting to 69th in the country and 10th in the Big Ten in total defense (giving up 400 yards a game). The Buckeyes surrendered 437 yards and 38 points to Nebraska before Boren shifted, and 481 yards and 49 points to Indiana with Boren on defense.

But many believe the stopgap measure may just strengthen the unit in time. And when a captain and two-year starter is willing to give up the equity he’s built in his position to try something entirely different, it’s a lesson for the entire squad.

“It’s about unselfishness,” Fickell said of Boren’s switch. “That’s the thing that we’re really, really trying to focus on, guys doing whatever’s best for the team. If they really, really, truly believe they’re here for something bigger than themselves, then a guy like that who can take himself out of a spot over on offense that he might be catching some balls and scoring some touchdowns into a position where, ‘Hey, this is where this team really, really needs me’ to provide depth and to provide a spark.

“This is a great example of what unselfish leadership can do.”

Boren, who was pressed into duty on defense when Etienne Sabino was sidelined with a broken leg, will be joined by Ryan Shazier and freshman Josh Perry at linebacker — one of the most disappointing positions for the Buckeyes despite their 7-0 start. Several top recruits have left the program due to injury or dissatisfaction, others (such as acclaimed signee Curtis Grant) haven’t panned out and most of the freshmen are not ready to take on the workload.

So Boren changed sides of the ball.

“Lacking any coaching, obviously,” Fickell said. “Coaching can be overrated at times. The first thing I said was he naturally gave us a spark.”

Now Meyer says the move is “temporarily permanent,” whatever that means. There’s still a chance that Boren might get to carry the ball again. But, for now, he’s a linebacker. Luckily, his No. 44 is interchangeable at either position.

“I wouldn’t really say ‘home,”’ Boren said. “I’ve been playing linebacker for so long — I haven’t played it for 3 years but I’ve been playing it my whole life playing football — your instincts take over after a while.”

Meyer is amazed — in both a good way and a bad way — that the move was made.

“I’m glad he’s over there. He brings confidence, he brings toughness, our players love him. He’s as unselfish a player as we have,” he said. “It is a little bit of shock. If you’d said that back in April — he’s your starting middle linebacker — I would have said no.”

Boren’s switch has inspired his teammates.

“That’s the ultimate sacrifice,” offensive lineman Jack Mewhort said. “He’s the best fullback in the country and he’s going to go over to linebacker and give up three years of playing football and maybe being All-Big Ten to do all he can for the team playing defense? We love him for that.

Jim Walker jim.walker@irontontribune.com   HUNTINGTON, W.Va. — Don’t be deceived by the record. This isn’t a soft spot in the... read more