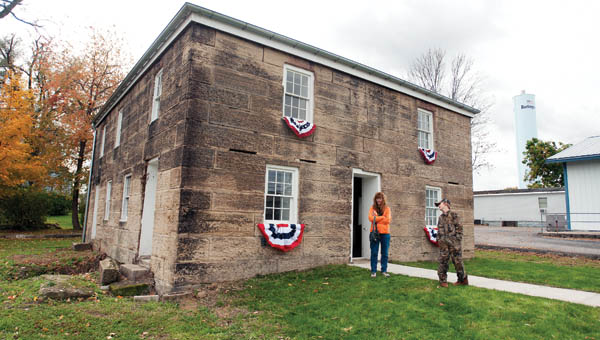 Eventgoers take a quick tour of the old Burlington jail after paying their bail during the Bail or Jail event Saturday. Proceeds from the event will go toward the renovation of the building.

BURLINGTON — At least on Saturday “crime” did pay. That’s when the committee to restore the Old Burlington Jail pulled in public officials to “incarcerate” them under a tent at the jail site in their first ever Jail or Bail fundraiser.

The goal was to raise approximately $5,000 to add to another $5,000 already in the committee’s treasury to fund recreating the second floor of the jail.

The committee’s hope is to turn the building into an Underground Railroad museum highlighting Burlington’s role as a stop on that road to freedom for hundreds of slaves during pre-Civil War days.

Each official who turned himself in during the event had to pay a $100 bail. By noon a few hundred dollars had been raised. What the jail committee didn’t know then was that they were going to end the day $5,000 richer.

Patterson is allowed by law to turn over extra money in that fund to the county’s general fund. Then the commissioners can determine how those dollars will be spent, including making a contribution to a charitable organization.

“We are very, very pleased and this is one of the many times that Lawrence County has come with us,” said Harriette Ramsey, president of the Concerned Citizens of Burlington and a member of the jail committee. “We are very grateful. Every project we have started, they have always supported Burlington. This is a Lawrence County project and they are supporting us in grand style.”

Restoring the old jail was Lawrence County’s contribution to the Ohio Bicentennial in 2003. But it was stalled because of lack of funds.

The present jail was the second built in Burlington, the county seat from 1816 to 1851, before the county seat was moved to Ironton. The limestone jail is the only remaining structure on the one-time courthouse site at Burlington-Macedonia Road. It was built in 1846 after the first jail, a log building, was destroyed by a fire set by an inmate.

“Burlington’s history is an important one for Lawrence County,” Commissioner Les Boggs said. “This jail restoration helps all of us remember. The good folks of Burlington are always doing great things.”