Not letdown for Vikings in win over Titans 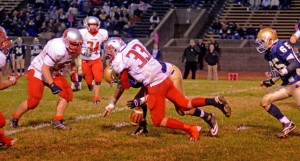 PORTSMOUTH — So much for a letdown.

After losing to Oak Hill last week in a game that would decide the Southern Ohio Conference I championship, the Symmes Valley Vikings regrouped and beat the Portsmouth Notre Dame Titans 26-13 on Saturday night.

The Vikings are now 7-2 overall and finished second in the SOC at 3-1. They also clinched a playoff spot in Region 23 of Div. VI.

“I was very pleased with our effort. We bounced back and didn’t let last week affect us. We had a good week of practice and we played well,” said Vikings’ coach Rusty Webb.

Symmes Valley did all its damage on the ground as they ran for 371 yards and did not attempt a single pass.

D.J. Miller ran 16 times for 127 yards and three touchdowns to lead the Vikings. Alec Herrell had 16 carries for 78 yards and a score.

After a scoreless first quarter, the Vikings drove 85 yards in eight plays capped by Miller’s 15-yard scoring run, Tyler Ferguson conversion kick made it 7-0 at the 8:54 mark.

Following a three-and-out stand by the defense, the Vikings went 59 yards in six plays for a 14-0 lead. Miller again did the honors with an 11-yard touchdown run.

The Titans had a first and goal at the 3, but three plays later found themselves facing a fourth-and-goal at the 9. Michael Mader found Jack Kayser with the scoring pass and Kevin Lewis booted the extra point with 6:38 on the clock.

Symmes Valley kept the ball the rest of the quarter as they drove 61 yards in 15 plays. The drive spilled over into the fourth quarter with Herrell running 2 yards for the touchdown.

A 15-yard penalty forced the Vikings to go for two on the conversion and the pass failed, but the lead was 20-7 with 10:39 left to play.

Notre Dame answered on a 66-yard touchdown run by Dakota Smith on a third-and-8 play. The conversion kicked was blocked and the Titans trailed 20-13 with 8:56 left.

Miller returned the kickoff to the Titans’ 30, but the Vikings fumbled the ball away two plays later.

However, the Titans were forced to punt and Caleb Holderby blocked the kick and the Vikings recovered at the 14. Three plays later Miller scored on a 6-yard run and it was 26-13 with 5:24 to play.

Miller came up with an interception on the Titans’ next series and the Vikings ran out the clock.

The Titans had 202 total yards with 152 coming on the ground. Smith carried 12 times for 93 yards and Mader was 4 of 12 passing for 50 yards with a touchdown and an interception.