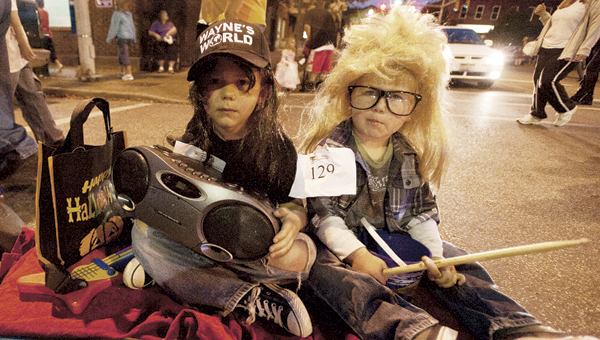 Two boys dress up as Wayne and Garth from the pop classic Wayne’s World as part of the annual Ironton Halloween Parade Monday in downtown Ironton.

Dressed to the nines in his police hat and uniform, complete with shiny badge, Landon piloted the vehicle up and down Third Street in Ironton during the city’s Safe Trick or Treat. With his blue and red lights flashing and a real walkie-talkie, Landon rode in search, not of perpetrators, but his favorite candy. 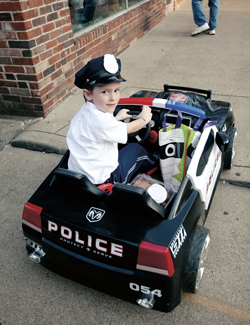 Landon Clark makes his way up and down the streets of Ironton in his mini police hemi equipped with donuts and coffee during the annual Ironton Safe Trick or Treat Monday in downtown Ironton.

Landon mother’s, Carla, said her son likes police officers and, since they already had the miniature vehicle on hand, the costume was a good fit for the occasion.

“We wanted to let him have some fun, and it’s nice out tonight,” she said. “…There is not a lot for the kids to do anymore.”

With a license plate that read “BEDROCK,” mothers Kelly Daniels and Tammy McGuire pulled around everyone’s favorite Stone Age characters: Fred (Mason Daniels, 3), Barney (Miles Daniels, 2) and Pebbles (Kaelyn Peters, 3). The mothers said they fashioned the wagon into a Flintstones car from a design they saw on the website Pinterest.

Both Daniels and McGuire said they preferred Safe Trick or Treat to the traditional door-to-door trick-or-treating.

For years, the City of Ironton has offered Safe Trick or Treat as a measure to keep area children safe while they seek out buckets full of goodies. This year, Third Street businesses didn’t disappoint as farm animals, Yodas and Darth Vaders, ghosts and witches, superheroes and even a Barbie, new in its box, got their fill of sweet treats. The city center also opens its doors for businesses and organizations to set up booths.

As he handed out Cow Tales to some trick-or-treaters, Lawrence County Sheriff Jeff Lawless said the yearly event shows good community spirit, as well as keeps the children safe.

“It keeps the kids in a safe environment,” Lawless said. “They know where their candy comes from so it’s safe to eat.”

Aside from keeping the children safe, Lawless said he enjoyed just seeing all the costumes and seeing the smiles on the children’s faces.

The annual Halloween parade and costume contest is sponsored by the Ironton Lions and Rotary clubs. Prizes were awarded for the best witch, most patriotic, best ghost, most original and the ugliest/scariest costumes.

Other Trick or Treat nights and times are coming up later in the week and next week.

For those who live in Ironton, Hanging Rock and Coal Grove as well as Russell, Ky., Trick or Treat will be Thursday, Oct. 25. The hours for Coal Grove will be 6-7:30 p.m. Hours for Ironton, Russell and Hanging Rock will be 6-8 p.m.

COAL GROVE — Police in Coal Grove are still searching for a village-owned vehicle that was stolen more than a... read more