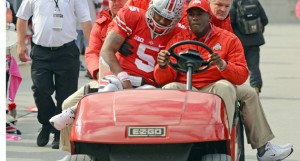 Ohio State Buckeyes quarterback Braxton Miller (5) is carted off the field after being injured in the third quarter of a Big Ten game at Ohio Stadium last Saturday. The Buckeyes defeated the Purdue Boilermakers in overtime, 29-22. (MCT Direct Photos)

COLUMBUS (AP) — In the moments immediately after star quarterback Braxton Miller was thrown to the ground and didn’t get up, Ohio State coach Urban Meyer said he saw an unbeaten season flash before his eyes.

Miller hasn’t been the sole reason that the Buckeyes have a perfect record and a top-10 ranking this season, after going just 6-7 a year ago. But he’s the biggest reason.

Miller lay motionless for several minutes after Purdue defensive back Josh Johnson’s tackle late in the third quarter on Saturday. After several minutes, he sat up, then was helped to his feet. With great effort, and flanked by trainers helping him take each step, he slowly walked to the sideline and then was carted to the locker room. He later was taken to the hospital where he was treated and released.

Shortly after the Buckeyes’ 29-22 come-from-behind victory in overtime over the Boilermakers, with backup quarterback Kenny Guiton leading a mad dash for a touchdown and tying two-point conversion with 3 seconds left in regulation, Meyer sent word that he had visited Miller in the hospital and that he was fine.

Now, despite looking as if his season might be ended by a concussion or neck injury just 72 hours earlier, Miller will practice with the team on Tuesday.

Meyer stopped short of saying he was surprised that Miller was OK.

The sophomore quarterback had briefly gone to the sideline in two games earlier in the season due to minor injuries. Each time he quickly returned.

Not this time. He appeared groggy and in intense pain as he was helped off the field, his legs wobbly. He was almost doubled over on the motorized cart on which he left the field to polite applause.

His teammates were shaken.

“Anytime you see your quarterback go down like that, it strikes a lot of different emotions,” offensive lineman Reid Fragel said. “It’s tough to see. You immediately ask, ‘Is he all right? Is he OK?”’

Physicians ran Miller through a battery of tests at the hospital, while his father waited nearby. Meyer, strength coach Mickey Marotti and offensive coordinator Tom Herman also visited him while he was undergoing baseline tests.

With no signs that he had suffered a concussion, or any other major injury, Miller was released around three hours after the game.

On Monday at his weekly news conference, Meyer said the only lingering symptom was a sore neck.

“He got, like, a whiplash,” Meyer said. “I had a long talk with him about it. He was just rattled. And once he settled down, he seemed to be fine. He made a comment to me he’s never really been hurt, not as far as a bruise or a contusion or a sprained ankle, nothing like that. It kind of rattled him a little bit, like it would rattle most athletes.”

Meyer said Miller had been cleared by doctors to return to practice.

Fragel said was asked if Miller seemed OK when he saw him a day after the game.

“He’s just a little bit slower (because he’s tired), but he expects to be back in practice this week,” Fragel said. “We’re looking forward to getting him back out there and seeing him move around a little bit.”

Because Miller takes a lot of open-field hits when he scrambles, Ohio State’s coaches have tried to get him to step out of bounds or slide to the ground rather than subject himself to a jarring tackle. So far, he has seldom avoided the contact.

Herman was asked about the varying degrees of how college athletes handle being hurt.

“(Braxton is) a very fine-tuned athlete,” he said. “Those guys don’t like it when they get hurt. It takes a little adjusting.”

Ohio State’s depth chart lists Miller as the starter when the ninth-ranked Buckeyes play at Penn State on Saturday night. That, of course, is dependent on there being no further problems this week and Miller continuing to feel better.

A sense of relief spread throughout the Buckeyes, not just the coaches but also all of the players and fans.

“He said he’s good so I believe him,” Bryant said of Miller.