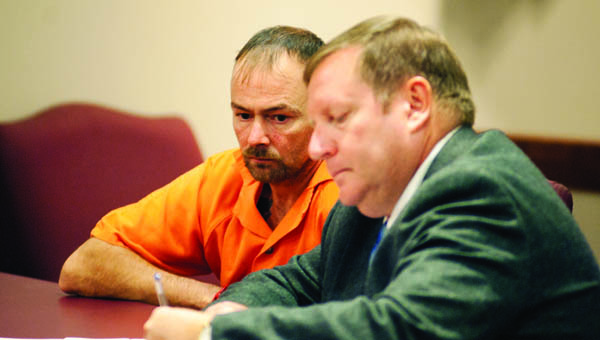 David Laber sits with his attorney, Scott Evans, at an Ironton Municipal Court appearance in August. Laber was arrested for making terroristic threats against management of Liebert and was found guilty by a jury Monday in Lawrence County Common Pleas Court.

A former Liebert employee faces up to three years in prison for threatening to shoot members of management and place bombs in the Ironton-based business.

Laber was arrested Aug. 1 after a fellow employee told authorities the man allegedly had told her he had thought about shooting people who worked for the company, specifically naming two members of management.

According to an Ironton Police Department report, Laber asked the co-worker “if she ever thought about putting bombs in Liebert.” Laber reportedly told his coworker he would “start with the front office” and would do it “like the guy in Colorado,” referring to mass shooting in a movie theater in Aurora, Colo., July 20.

Assistant Prosecuting Attorney Mack Anderson said the maximum prison sentence for third-degree felonies is three years in prison, and that he would ask the judge for Laber to be sentenced to that or close to the maximum.

Anderson said this was the first terroristic threats case he had prosecuted.

“You have to take them seriously nowadays,” Anderson said, citing various shootings at colleges, the Aurora movie theater, and last week’s shooting at a spa in Wisconsin.

Judge Charles Cooper asked for a pre-sentence investigation in the case and set sentencing for Oct. 31.

M&M Inflatables is adding a 3,600 square-foot party center for private parties at its location on South Third Street in... read more