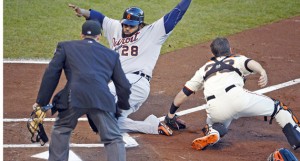 Buster Posey of the San Francisco Giants tags out Prince Fielder (28) of the Detroit Tigers trying to score on a second-inning double by Delmon Young in Game 2 of the World Series at AT&T Park on Thursday. (MCT Direct Photos)

SAN FRANCISCO (AP) — A Giant dose of small ball, and suddenly San Francisco finds itself in a most unique position — way ahead in a postseason series.

Madison Bumgarner shut down the Detroit Tigers for seven innings, then the Giants took advantage of a bunt that stayed fair to eke out the go-ahead run in a 2-0 win Thursday night for a 2-0 edge in the World Series.

Gregor Blanco’s single trickled to a stop inches fair on the infield dirt, setting up Brandon Crawford’s run-scoring double-play grounder in the seventh. Hunter Pence added a sacrifice fly in the eighth, and that was plenty for these masters of the October comeback.

“It definitely feels a whole lot better than having our backs against the wall,” Bumgarner said. “But you can’t relax. We’ve got to keep pushing.”

Game 3 will be Saturday night in Detroit and for once, the Giants aren’t playing from behind. They overcame a 2-0 deficit to beat Cincinnati in the best-of-five division series and escaped a 3-1 hole against St. Louis in the NLCS.

The loss certainly left the favored Tigers wondering what else could go wrong.

Prince Fielder was thrown out at the plate by a hair and moments later starting pitcher Doug Fister was struck squarely in the head by a line drive.

The 6-foot-8 Fister managed to stay on the mound, and even excelled. Bumgarner more than matched him, however, allowing just two hits before the San Francisco bullpen closed it out before another pulsating crowd.

Santiago Casilla pitched a perfect eighth and Sergio Romo worked the ninth for a save in the combined two-hitter, leaving Triple Crown winner Miguel Cabrera and his team in a huge hole heading back to Comerica Park. Anibal Sanchez will start for the Tigers against Ryan Vogelsong in Detroit.

The Tigers looked rusty at the plate, maybe still lost following a five-day layoff after an ALCS sweep of the Yankees. Cabrera hopped up in frustration after third baseman Pablo Sandoval, who homered three times in the opener, snared his early line drive.

“Well, what are you going to do about it?” Tigers manager Jim Leyland said. “We got two hits tonight. I’m certainly not going to sit up here and rip my offense because last night I thought we had some pretty good swings. Cabrera hit a bullet tonight.”

Bumgarner had something to do with the Tigers’ troubles, too.

Bumped from the NLCS rotation after two poor postseason starts, he returned with a flourish. The left-hander struck out eight and looked as sharp as he did in the 2010 World Series when, as a 21-year-old rookie, he stopped Texas in Game 4 on the way to a championship.

“Just able to make pitches,” Bumgarner said. “I hadn’t done a very good job of making pitches this postseason so far and this is a team that you’re not going to be able to afford to miss with.

“They hit some balls hard, but luckily we were in the right spot,” he said.

Along with his bunt, Blanco might have hit the hardest ball of the game — the liner that nailed Fister in the second inning. The ball struck the right side of his head and deflected on the fly to shallow center field.

Fister showed no visible effect from the blow — in fact, some in the crowd wondered whether the ball perhaps glanced off his glove because Fister stayed on his feet. Only when fans saw replays did groans echo around the ballpark.

Leyland, pitching coach Jeff Jones and a trainer went to the mound, and Fister insisted on staying in the game. He walked the next batter to load the bases with two outs, but retired Bumgarner on a popup, starting a streak of 12 straight hitters set down by Fister.

“I don’t want to make light of it, but it was kind of comical really because Doug was right on with everything. But I was scared to death when it happened.”

The game remained scoreless until the seventh, right after actor Tom Hanks — a former peanut vendor at the nearby Oakland Coliseum — sang “Take Me Out to the Ball Game” on the field.

Pence led off with a single and Fister departed, getting lots of hugs in the dugout. Rookie reliever Drew Smyly walked Brandon Belt on a full-count pitch and Blanco’s bunt loaded the bases.

The Tigers kept their infield back up the middle, and had no play at the plate on Crawford’s bouncer.

“We felt like we played double-play depth because we felt like we couldn’t give them two runs. That’s why we did that, and we got the double play,” Leyland said.

Pence added the insurance run the next inning with his flyball off Octavio Dotel.

“We played good small ball today,” Pence said. “We played a great game of baseball, had outstanding pitching and great defense and we found a way to get it done.”

Fielder and the Tigers came up inches short of taking an early lead, the result of yet another alert play by second baseman Marco Scutaro and a dubious decision by third base coach Gene Lamont.

Fielder was hit by a pitch to lead off the second, Delmon Young followed with a double and when the ball rattled around in left field, Lamont waved the burly slugger home. Even with no outs, Lamont sent him.

“I think Gene just got a little overaggressive,” Leyland said.

Scutaro, in the middle of every big play for the Giants this month, dashed across the diamond, caught Blanco’s relay and unleashed a strong throw to the plate. All-Star catcher Buster Posey made a swipe tag to Fielder’s backside, just as the Tigers star slid home. Umpire Dan Iassogna had a clear look and made a demonstrative call — out!

Fielder immediately popped up from his slide and pleaded his case with two hands, saying he didn’t feel the tag. Leyland rushed out and pointed to the plate. At second base, Young yelled, “No!”

But even if there was replay review, it wouldn’t have helped the Tigers. Because TV replays showed Iassogna, working his first plate job in a World Series, got it right.

There was no dispute that Fister somehow avoided a serious injury moments later.

Among those who winced was Oakland pitcher Brandon McCarthy, who sustained a skull fracture and brain contusion after being hit by a line drive last month.

NOTES: Bumgarner struck out Austin Jackson and Omar Infante to start the game. Two other Giants fanned the first two batters in a Series game: Christy Mathewson (1905) and Carl Hubbell (1933). … Bumgarner picked off Infante at first base to end the fourth. Infante made a break for second and, like Fielder earlier, came up short with his slide. … Scutaro was the only Giants hitter to have previously faced Fister. … Posey has a hit in all seven World Series games in his career.

ROSEMONT, Ill. (AP) — Tom Crean didn’t really understand what he was getting into when he took the Indiana job... read more