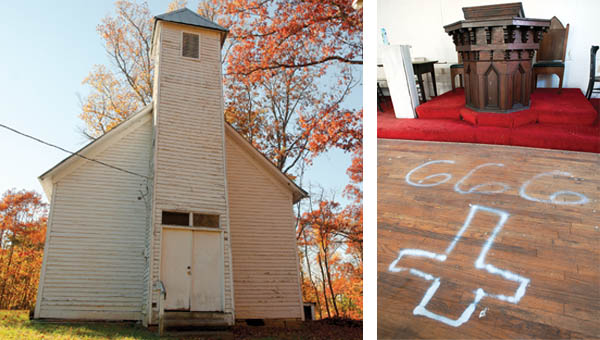 An inverted cross and the numbers 666 are spray-painted on the floor of the historic Macedonia Missionary Baptist Church located off of County Road 120N. Vandals broke into the church leaving satanic symbols and stealing items inside.

BURLINGTON — Chris Saunders had heard the rumors, but the Burlington historian had to see for himself. So just before dusk on Monday, Saunders drove up the hill of the Burlington-Macedonia Road to open the door of the old Macedonia Baptist Church to find what he didn’t want to see: Satanic symbols spray-painted on the walls and the pews.

“I was just angry,” Saunders said. “Without question angry. I wanted to lay hands on someone and I am not talking about that in the religious sense.”

Everywhere Saunders could see were the marks of vandals: an upside down cross on the floor with the numbers 666 beside it; stick figures and Pac-Man arcade game icons splashed everywhere.

“They put a pentagram, but instead of inverting it, it ended up with a star and circle in it,” Saunders said. “I think it is kids who didn’t know what a pentagram is. They wrote 666 and Church of Evil.”

On another wall was the letter “A” with a circle surrounded it, an acknowledged symbol of anarchy, with the letters LEX following it.

Lying on top of the pulpit was a barbecue grilling fork, a reminder for Saunders of an earlier act of animal cruelty he found on the church grounds.

“About two years ago, I filed a police report that someone had skewered a kitten about 9 weeks old and stuck it to a tree,” Saunders said.

No one was ever arrested for that act.

Besides the vandalism there was also the theft of at least one piece of church property.

The frame church, built in 1849, was once a symbol of freedom for African Americans fleeing the tyranny of slavery.

Built from the sweat of men whose names are part of the fabric of the history of the Burlington community — the Burlington 37 and the Polley family — the Macedonia church was a stop on the Underground Railroad.

Many of the Lawrence County conductors on that railroad went to Sunday services there. Eli Thayer, the founder of Ceredo, W.Va., donated the wood used to build the church.

But today the church sits abandoned, off Burlington-Macedonia Road, isolated from the heart of the Burlington community.

That is a location that has made it an easy target for vandals. Many times Saunders has checked on the church and found beer bottles and cigarettes dumped around the pews.

But Saunders is not aware of vandalism to this extent before.

“The sad thing is even people in the area, some people know the history and others don’t,” he said. “There is the Campbell House in Ironton and this predates that. This is probably the second oldest Underground Railroad stop in Lawrence County.”

“We tried to get a camera at the park, but that is so expensive,” she said. “They stole both of our swings. There are so many positive things you can do. Negative things I don’t understand it.”

As of Thursday, no police report has been filed on this round of vandalism.

Meeting next week on fate of Ellisonville rest area

PEDRO — Petitions and a high school letter-writing campaign may have temporarily saved Ellisonville Park from the wrecking ball. “We... read more