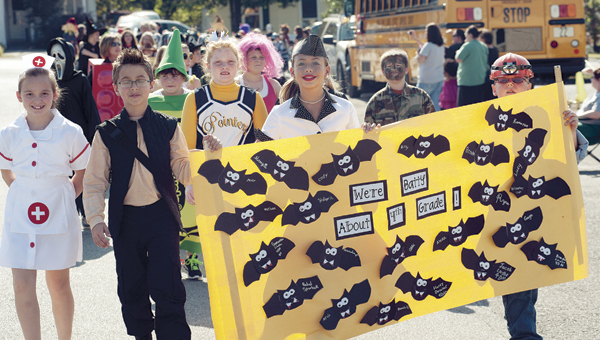 SOUTH POINT — Jordan Ermalovich may only be 8 years old, but already the South Point second grader knows what it is like to be the grand marshal of a parade.

That’s how Jordan spent Friday afternoon: Leading the school’s Halloween Parade through the streets of the village.

But how he got picked was better than being in the parade. Jordan was chosen as the winner of the “Dream Big, Read — Accelerated Reading Contest,” the entire school participated in.

For every book the students read as part of the computer-based reading program they received points. The harder the book, the more points the child would earn.

“Jordan was higher than the fifth grade,” Lance Brammer, his second grade teacher, said. “He had some stiff competition taking books home in the evening. He really pushed himself.”

Jordan estimates he has read 200 books since the first of the school year.

As he rode around in a golf cart during the parade, Jordan wasn’t alone in his accomplishments.

All 23 students in Brammer’s class earned the most points in the entire school, getting the honor of riding around in a fire truck during the parade, even their teacher.

“My parents live right by the school and they are excited at seeing me on the fire truck,” Brammer said. “They keep telling people ‘Our son will be riding a fire truck.’”

A Halloween parade is the norm for this time of year at South Point Elementary. But usually it’s just around the halls of the school. But this time school officials wanted to tie it to the ongoing accelerated reading program, creating the schoolwide contest.

Students choose books according to the topics they wish to read. After they have read the books, they then take a computer test on the book. When they pass that test, they are allotted points.

As the elementary school staff was mapping out the plans for the parade, they got the idea to ask the high school band to join in.

“What is a parade without a band?” Bill Christian, administrative assistant at the school, said.

Then the high school cheerleaders wanted to join in.

“This has turned into a real parade,” Christian said.

That kind of collaborative effort is applauded by Brammer.

“It brings all the schools together,” he said. “It has a community feel.”

Two part-time employees with the Lawrence County Sheriff’s Office are now out of work after they were given notices Friday... read more