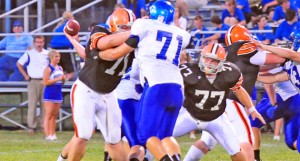 Ironton coach Mark Vass knows his team is playing the Bloom-Carroll Bulldogs in the playoffs on Friday. After that, things are kind of fuzzy.

Ironton has scouted the Bulldogs and has some film from late season games, but the Bulldogs also used different players at various positions earlier in the season, mainly running back and quarterback.

Ironton (6-3) will attempt to get familiar quickly when the Fighting Tigers host B-C at 7:30 p.m. Friday in the Division IV Region 15 quarterfinals.

The Bulldogs (5-5) began the season with Sam Fraturo (5-9, 170) the top running threat. A transfer from Fairfield Christian where he ran for 1,044 yards and 17 touchdowns last season, Fraturo had 69 carries for 426 yards in four games.

“Jude runs really hard and he has good speed,” said Vass. “We haven’t seen (Fraturro) in any of the films we have, so we’re not sure what he can do. We’ll just have to be ready. But they have more than just a running game.”

Kelly Milliser (6-2, 160) started the season at quarterback before being replaced by slotback Levi Fetherolf.

Milliser was 12 of 22 for 130 yards and a touchdown in the Bulldogs’ first game, but he threw four interceptions.

“Regardless of who plays quarterback, they are both good athletes. We saw (Fetholf) at slotback and he’s pretty good and Milliser impressed us at quarterback,” said Vass.

The top receiver for B-C is 6-foot-2, 160-pound Tyler Song who had six catches for 121 yards and a touchdown against Amanda-Clearcreek.

“Their defense is very aggressive and they mix it up well. They give you a lot of different looks,” said Vass.

Bloom-Carroll began the season 2-5 but closed with wins over Circleville, Amanda-Clearcreek and Hamilton Township to qualify for their first playoff appearance since 2000 when they posted their last winning season at 8-2.

COLUMBUS (AP) — For the second year in a row, Ohio State has just one senior on its roster. Save... read more