Carving out a new spirit 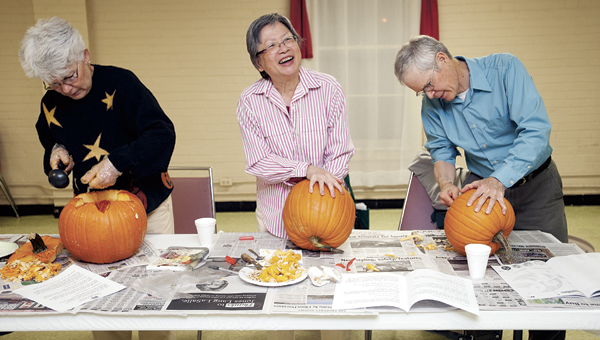 Carol Allen, Esther Wei and Robert Williams scoop out the inside of pumpkins during a service at the Christ Episcopal Church Wednesday evening.

Hazel Weinfurtner steadied the soon to be special Jack O’Lantern on the table as her nephew, 7-year-old William Houmas, pulled out an orange mush of seeds and pumpkin guts.

All around the tables in the parish hall of Christ Episcopal Church Wednesday night were piled high the insides of pumpkins that were being transformed into the liturgy to reach another spiritual level for those participating.

As those there finished scooping out their pumpkins, they paused to listen to the Rev. Sallie Schisler.

Then those in attendance replied, “Hollow me out Lord.”

This was the fourth year for Christ Church in Ironton to have the event that is basically a liturgy for children, but filled with a direction that adults can find beneficial, Schisler said.

“What we are doing is using the pumpkin to symbolize removing all that is inside us that keeps us from a connection with God,” she said. “When we scoop out the inside of the pumpkins, we are getting rid of all the barriers that keep us from being connected.”

Halloween was a feast day for medieval Christians in preparation for All Saints Day, which is celebrated in many liturgical churches today. Halloween has its roots in Celtic culture.

“Mostly it came from the Irish who celebrated it,” Schisler said. “It was their festival for the end of summer. Customs really began to grow up around it.”

And with the customs came turning everyday items into symbols of greater meaning.

“The pumpkin began as the symbol of the end of the harvest,” she said. “It is one of the last thing you harvest.”

After each one at the service Wednesday cleaned out their pumpkins, they began the process of carving the traditional Jack ‘O Lantern face, turning that into a deeper spiritual exercise.

“When we carve the pumpkin’s eyes, we are seeing the goodness of God,” Schisler said. “The mouth is for the stories of the Gospel. And when we put the candle inside, it is the command to be the light of the world. The meaning of this is still very appropriate for adults because all of us need to be hollowed out to make room for the holy.”

Ironton man gets 3 years for threats

Will appeal decision An Ironton man will spend the next three years in prison for an incident that he said... read more