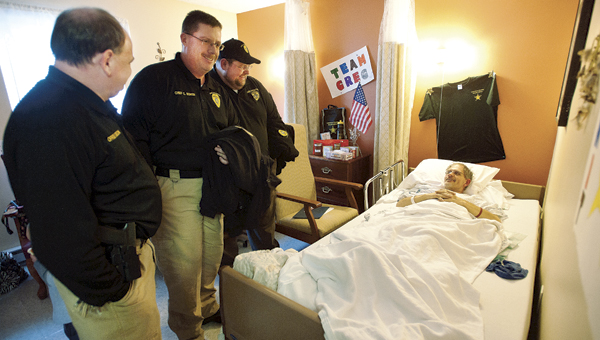 Members of the Lawrence County Adult Probation Department stop in for a visit with their friend Greg Scarlotti Thursday afternoon. Scarlotti, a former Lawrence County sheriff’s deputy, has been diagnosed with multiple myeloma.

Members of Team Greg showed their support by holding up “We Love You, Greg” and “Fight the Fight” signs as well as released colorful balloons in the air for the former Lawrence County Sheriff’s Deputy who is fighting stage III multiple myeloma (cancer of the bone and blood).

Scarlotti was transported from the UK Cancer Center in Lexington, Ky., where he was receiving treatment, to Sunset Nursing Center in Coal Grove, with a convoy of law enforcement, fire and EMS vehicles in tow.

Scarlotti worked in law enforcement for about 20 years and those who worked with him say he left a great impression on them.

Sheriff Jeff Lawless said Scarlotti started at the sheriff’s office in 1991 as a special deputy, was hired on as a full-time officer in 1992 and left the department in 2009.

“Greg was well liked and respected here,” Lawless said. “We still consider him part of our family and that is why we try to honor him. It is sad that one of your own is suffering that kind of illness.”

Sgt. Steve Cartmell worked with Scarlotti at the sheriff’s office and said the two were close.

“Words can’t describe the friendship we have,” Cartmell said. “We’ve been through a lot on the job and off the job as friends.”

Cartmell said the two attended Cincinnati Reds games together and also experienced major situations on the job together.

“I always knew he had my back and I had his,” Cartmell said. “He will always be like a brother to me.”

Dennis Gibson was chief of the Chesapeake Police Department while Scarlotti served as an officer there.

“He was an excellent officer,” Gibson said. “He worked above and beyond. … “He was a real good friend of mine. Like a brother.”

With his wife Debbie, his son Corey and his daughter Ashley and other family members by his side, Scarlotti welcomed visitors at Sunset Nursing Center, his room decorated with “Welcome Home” banners. There was one visitor in particular who couldn’t wait to see him, 2-year old Gabriel, Scarlotti’s grandson.

“It is really awesome what everyone has done for me,” Scarlotti said.

“It really meant a lot to him,” his wife, Debbie, said.

Since Scarlotti was diagnosed about two months ago, Team Greg was formed to help put on fundraisers and benefits to raise money for his final expenses.

Currently, Team Greg is selling T-Shirts for $10, bracelets for $2 and stickers. Team Greg member deputy Julia Jones said there is another fundraising event in the works, but has not been set yet.

Program to help with electric bills

Offering county residents a way to reduce their electric bills is the purpose behind a new partnership between Lawrence County... read more