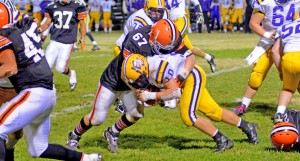 Hey Dorothy, can we borrow the Tin Man’s oil can.

After a two-week layoff for the team and even more for several injured players who returned, the Ironton Fighting Tigers shook off the rust in time for their Division IV Region 15 quarterfinal playoff game Friday at Tanks Memorial Stadium.

Patrick Lewis scored four touchdowns and ran 26 times for 310 yards including 249 in the second half as the Ironton Fighting Tigers beat the Bloom-Carroll Bulldogs 41-16 Friday in the Division IV Region 15 quarterfinals.

“We played pretty well, but we didn’t execute at times as well as we should have. That may have been because of the layoff,” said Ironton coach Mark Vass.

Ironton (7-3) racked up 414 yards on the ground and 482 total yards despite losing starting two-way tackle Adam Webb to an injury in the second quarter.

“We had to make some adjustments. I thought Devin Guy stepped up for us. He hasn’t had to play both ways all season and he filled in well,” said Vass.

Ironton took the opening kickoff and went 64 yards in nine plays to take a 7-0 lead on a Lewis 8-yard run.

The Fighting Tigers started moving the ball on their next possession, but B-C recovered a fumble at the Ironton 46 and scored seven plays later on a 14-yard Kelly Milliser to Tyler Sorg pass.

A bad snap sailed over the punter’s head and gave Ironton the ball at the Bulldogs’ 5-yard line. Tanner Dutey scored two plays later on a 1-yard quarterback sneak for a 14-7 lead.

B-C got within 14-13 when Milliser hit Sorg on a 44-yard Hail Mary pass as time expired in the first half. After Ironton dropped a potential interception on third down, Milliser threw what appeared to be another interception but the ball went through the hands of an Ironton defensive back into Sorg’s hands.

The conversion kick was wide right and Ironton held a 14-13 halftime lead.

The Bulldogs put together their only real drive of the game when they went from their own 38 to the Ironton 6. The defense forced a 23-yard field goal by Dominic Garris to give B-C a 16-14 lead to begin the second half.

But three plays later Lewis took over with a 53-yard scoring run to make it 20-16 with 6:07 left in the third quarter.

“We stepped up our game. Our conditioning helped. It’s hard, but it helps us in the long run,” said Lewis.

After forcing a punt, Ironton drove to the Bulldogs’ 13-yard line only to be stopped on downs.

“I think the defense did a pretty good job,” said Ironton linebacker Mo Phillips. “We were more worried about the run. We didn’t think they would throw that much, but we took away the run and they started to throw more.”

The Bulldogs had to punt again early in the fourth quarter and Lewis broke the game open with a 64-yard touchdown run on the ensuing play for a 34-16 lead with 7:04 on the clock.

The Bulldogs’ fifth punt gave the ball to Ironton at the 40-yard line. Lewis carried four of the next five plays including a 23-yard scamper with 41 seconds left to set the final score.

“We tightened things up in the second half. We were able to take the running game away and force them to throw the ball. Our defense did a good job,” said Vass.

Rosecrans pulls away from Vikings, 26-3

Symmes Valley Vikings’ running back D.J. Miller (9) gains some of his 171 yards against the Bishop Rosecrans’ defense. Miller’s... read more