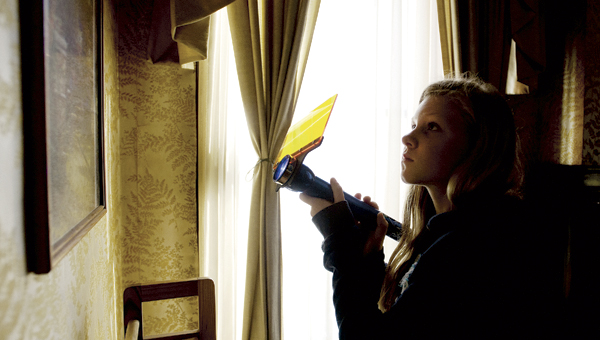 Brianna Brooks uses a UV flashlight to detect blood and fingerprints during a crime scene and forensics class.

CHESAPEAKE — Kelly Romans smashed her thumb onto the side of a silver Diet Coke can, brushed on some black grainy dust on that spot and got amazed.

“This is so cool,” she said as her thumbprint materialized on the can.

In the next room her colleagues from the Chesapeake Middle School talented and gifted program were getting tips on how to create blood spatters.

“Aim for the wall,” Ashley Zeile, with the Marshall University forsenic program, advised.

On Friday Chesapeake’s seventh and eighth grades went to the forensic program’s Crime Scene House on the university’s campus, where they discovered detective work isn’t exactly the way it is portrayed on television.

“It includes hands-on work on what an actual crime scene would be like,” Nadine Borovicka, with the program, said. “It is not the 30-minute crime scene on TV. It takes forever.”

The students discovered that when they had to measure everything from furniture to footprints, they learned that determining what happened at a crime scene is in the details. Like how the appearance of blood depends on the kind of material it falls on.

“Blood never lies,” Zeile told the students. “You see the stain. Once the stain is on the wall or the floor, you can’t change it. A carpet is more absorbent and it will soak in. On paper, it will spread out and you will see nice drops.”

This week the TAG students will present what they learned to the rest of the middle school Thursday and Friday when they present their own crime drama, which they wrote. There will be 10 different breakout sessions where the TAG students will teach their classmates some basics of forensics.

“This is to see how science and math is used,” Terry Montgomery, Chesapeake TAG teacher, said. “It is one way to solve a crime.”

Why do we vote?

WASHINGTON (AP) — There’s always grousing about the many people who don’t bother to vote. But look at it the... read more