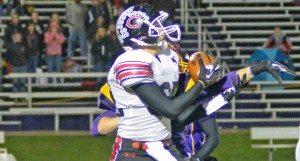 LUCASVILLE — The Lucasville Valley Indians exploded in the third quarter with four touchdowns to break open a 14-8 halftime lead and went on to post a 41-16 win in the Division V, Region 19 regional quarterfinal over the Coal Grove Hornets.

Coal Grove (6-4) got on the board first when Brandon Hogsten capped a 16-play, 66-yard drive with a 5-yard scoring run.

Alex Bare found Isaiah Gunther in the back of the end zone for the two-point conversion to give the Hornets an 8-0 lead with 4:42 remaining in the first quarter.

Late in the first quarter, after forcing a Valley punt, the Hornets looked to put together another long drive. But a Coal Grove fumble gave the ball to the Indians at the Hornets’ 26-yard line.

On the second play of the second quarter, Nate Arnett found the end zone from 19 yards out. The extra point was no good and Coal Grove now led 8-6 with 11:11 to go in the first half.

After both teams traded punts and a Coal Grove turnover on downs, Valley took possession at their own 17. After a 1-yard gain on first down, quarterback Will Howard found Ethan Clark-Holbrook down the sideline for a gain of 34 yards.

Five plays later, Howard found Matt Rawlins from 10 yards out. Howard ran in the two-point conversion to give the Indians a 14-8 halftime lead.

Lucasville Valley (11-0) took the opening possession of the second half and went 51 yards in five plays to score. Howard connected with Nate Arnett from 15 yards out for the touchdown and Brice Romanello added the extra point and it was 21-8 with 9:56 to go in the third.

On the ensuing kickoff, Matt Hodge recovered the onside kick at the Hornets’ 33, and two plays later Howard called his own number from 4 yards out to score. Romanello added the extra-point to make it 28-8 with 9:42 left in the third quarter.

After a Coal Grove turnover on downs, Valley took over at their own 46. However, on the first play, Brandon Hogsten knifed through the offensive line and hit Howard before he could hand the ball off to force a fumble that was recovered by Coal Grove at the Indians’ 37.

But Coal Grove could not take advantage as Conor Markins was tackled a yard short on fourth down to give Valley the ball at their own 29-yard line.

The Indians extended the lead when Howard found Hayden Dunn with a 3-yard touchdown pass. The extra-point was no good and the score was 34-8 with 2:14 to go in the third.

On the third play on the ensuing possession, the ball popped up in the air from the Coal Grove running back and was caught in the air by Isaiah Gunther. However, the ball again popped up and it was caught by Cole Delotell who returned it 28 yards for a touchdown that made it 41-8 at the end of the third quarter.

Midway through the fourth quarter the Indians were threatening again, but the Hornets forced a fumble and took over at their own 5-yard line.

Five plays later, Alex Bare found a crease and raced 72 yards for the touchdown. Estep added the two-point conversion to set the final score of 41-16.

Lucasville Valley will move on in the Division V Region 19 semifinals to take on Bucyrus Wynford.