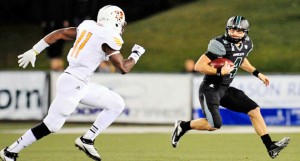 Matt Schilz was 7 of 17 for 91 yards and a touchdown for Bowling Green, fighting Kent State for the East Division title. Kent State, 5-0 in conference play, is at Miami of Ohio on Saturday.

After Ohio cut it to 19-14 in the third quarter on Tettleton’s 3-yard touchdown pass to Chase Cochran, Bowling Green countered on Samuel’s 4-yard scoring run early in the fourth.

Tettleton opened the scoring on a 5-yard run in the first quarter, but Bowling Green scored 19 straight points in the second quarter to take a 19-7 lead. Samuel had a 15-yard touchdown run, Schilz threw a 55-yard scoring pass to Chris Gallon, Tyler Tate added a 35-yard field goal, and the Falcons added a safety when Ohio punter Matt Weller was tackled in the end zone after a low snap slipped through his hands and went between his legs. Weller, the Bobcats’ kicker, took over the punting duties after Grant Venham had a punt blocked and was tackled short of a first down after mishandling a snap.

Bengals’ must stop another Manning

CINCINNATI (AP) — Peyton Manning came to town last weekend and had his way, sending the Bengals to their fourth... read more