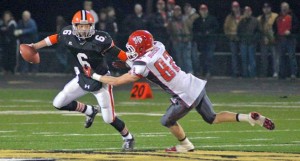 ATHENS — First-year Ironton head coach Mark Vass made a quick call on his cell phone to Dr. Gregory House to ask for some help.

“Sorry. Not even I can do anything about what’s happened to your team,” said House.

Okay, so there was no call to the fictional character, but it certainly underscores the misfortune that riddled the Ironton Fighting Tigers and fueled their 42-7 Division IV Region 15 semifinal loss to the Johnstown-Monroe Johnnies on Friday.

To make matters worse, leading rusher and scorer Patrick Lewis – who was averaging 11 yards a carry — was lost midway through the second quarter with an injury as was two-way end and top defensive player Aaron Stephens with a high ankle sprain.

“The injury bug caught up with us. We gave up an easy (touchdown) on a blown coverage and we had a turnover on the kickoff that gave them another score,” said Vass.

“I think we were down to about 20 (healthy) kids. It’s no excuse. That was a good ball club. Even if you were healthy, you’re going to be in a dog fight without a doubt and hopefully it would have been a better game.”

After running for 414 yards last week — 310 by Lewis — Ironton finished with just 128 rushing yards and 29 passing. Lewis had 17 yards on seven carries and caught three passes for 29 yards.

Ironton (7-4) took the opening kickoff and drove 76 yards in 12 plays capped by Dutey’s 1-yard run. Jalen Schweickart kicked the conversion and it was 7-0 at the 6:17 mark.

Johnstown (10-2) used a 29-yard pass to Nick Sadinsky to reach the Ironton 43, and two plays later Bailey Duncan was left all alone and caught a 43-yard scoring pass from Tyler Thompson to tie the game.

The Johnnies squibbed the kickoff and the ball took a bad bounce off an Ironton player and they recovered at the Ironton 27.

Five plays later Thompson scored on a 2-yard run and the Johnnies had a 14-7 lead with 2:57 left in the first quarter.

“The opening drive looked good. We executed pretty well, we drove down the field, scored and got off to a good start,” said Vass.

“But then we had a blown coverage and gave up the easy score and the kickoff took a funny bounce and they get it and score. That was a big momentum (swing) for them.”

Each team had two more possessions and couldn’t generate any offense, but then Lewis ran 10 yards on a first down play but was injured when he was hit after going out-of-bounds.

The series died and Ironton punted. Stephens was hit on the ankle during the return and suffered a high ankle sprain and did not return.

The Johnnies took advantage of the depleted Ironton defense and went 56 yards in six plays to take a 21-7 lead. Thompson scored again on a 4-yard keeper to cap the drive.

Following a quick three-and-out, the Johnnies quickly went 77 yards in seven plays to score. Thompson kept the ball for his third touchdown run as he went the final 5 yards with just 31 seconds left in the half.

Despite the 28-7 deficit, Ironton came out aggressive in the second half and Trevor White recovered Schweickart’s onside kickoff.

But Ironton was unable to move the ball and turned it over on downs.

Johnstown drove to the Ironton 28 but the defense stopped Adam Carter for a 2-yard loss on a fourth down play.

Dion Brown ran for 16 yards on Ironton’s first play, but the momentum swing ended abruptly when Sadinsky picked off a pass and ran it back to the 28.

The Fighting Tigers answered with a drive from their own 28 to the Johnnies’ 38 only to fumble the ball away.

J-M took advantage of yet another turnover and scored on a 26-yard pass from Thompson to Preston Hiles two plays into the fourth quarter and it was 42-7.

Vass was pleased with the way his team responded after halftime.

“This team had a lot of grit. They love Ironton football. There weren’t going to lay down. Give (Johnstown) credit. They were a good team,” said Vass.

Despite the season-ending loss, Vass praised his team’s efforts and the adversity they faced throughout the year.

“I’m just proud of these kids. It’s been a successful season. Like I told them, I couldn’t have had a better group, especially that senior group. They bought in to what we were doing. They had great leadership and they committed to me and the coaches, they did everything we asked, they played hard and I’m just proud of them even in this game,” said Vass.