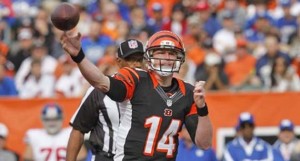 CINCINNATI (AP) — A.J. Green was partly correct. The defending Super Bowl champions do have a lot of holes on the defense.

And everywhere else, it turns out.

Andy Dalton threw a career-high four touchdown passes — each to a different receiver — and the Cincinnati Bengals ended their four-game losing streak by beating the reeling New York Giants 31-13 on Sunday.

The Bengals (4-5) sustained their season by taking advantage of a championship team that appears to have hit bottom. Eli Manning threw a pair of interceptions that led to third-quarter touchdowns, and New York (6-4) had four turnovers in the second half overall.

“That’s what won the game for us, getting the ball with great field position and scoring when we got down there,” said Dalton, who was 21 of 30 for 199 yards without a sack or interception.

The talk heading into the game was generated by Green, who suggested to a New York radio station that the Giants “have a lot of holes” on their defense.

Couldn’t argue that point after the Bengals rolled up 31 points in only three quarters.

“I just feel like this is a good stepping block for us,” said Green, who had the first of the four TDs. “I put a lot of pressure on myself.”

Now, the Giants are starting to feel a little pressure themselves.

They head into their off week with back-to-back losses and a lot of issues, especially on offense. Manning had another subpar game, failing to live up his family legacy of beating the Bengals. Older brother Peyton improved to 8-0 against Cincinnati on the same field a week earlier, leading Denver to a 31-23 win.

This one was surprisingly lopsided as the Giants hurt themselves with bad passes, broken coverages, a dropped touchdown pass and penalties in front of a less-than-capacity crowd of 56,614.

“No, I’m not worried,” Manning said. “Over the years, we’ve gone through stretches where we haven’t played our best football and we’ve been able to bounce out of that, and that’s what’s going on right now.”

Manning was sacked a season-high four times by a defense that hardly touched his brother. He also threw two interceptions under pressure that led to Bengals TDs and a 31-6 lead in the third quarter. Manning finished 29 of 46 for 215 yards, falling to 1-2 career against Cincinnati.

Manning threw for only 125 yards, his fewest in four years, during a sloppy 24-20 loss to the Steelers last Sunday that finished a week of turmoil from Superstorm Sandy. The Giants badly wanted to get back in form before their bye week.

Instead, they were worse.

The Giants gave up a 68-yard punt return, Victor Cruz dropped a pass at the goal line, and New York’s four turnovers in a horrific second half helped the Bengals pull away.

Everything went wrong, right from the start.

Cincinnati’s first big play was made by their Pro Bowl receiver, who got a little rise out of the Giants with his comment about the holes in their defense. Five plays into the game, he found a huge one. Cornerback Corey Webster let him go down the sideline, expecting help in coverage that never came. Green was wide open for a 56-yard touchdown catch.

The Giants have given up 39 passes of 20 yards or more, 10 for touchdowns. Green has a touchdown catch in eight straight games, tying T.J. Houshmandzadeh for the second-longest streak in club history.

Green was diplomatic, saying his pregame comments were misconstrued as a criticism.

“Their defense is great,” said Green, who had seven catches for a game-high 85 yards. “We were able to break some big plays.”

There were openings for all of Dalton’s receivers. Andrew Hawkins made a one-handed catch for an 11-yard touchdown that came off another Giants mistake. Steve Weatherford’s punt went out of bounds at the Cincinnati 14-yard line, but a penalty forced a rekick. Adam “Pacman” Jones slipped through two defenders for a 68-yard return that set up the score.

Jones started Cincinnati’s big third quarter by stripping Ahmad Bradshaw of the ball at the Cincinnati 14-yard line, preventing New York from getting back into the game.

On New York’s next possession, Manning’s deflected pass was intercepted by tackle Pat Sims at the 12-yard line. Dalton threw a 10-yard touchdown pass to tight end Jermaine Gresham, who outjumped Antrel Rolle in the end zone. Rolle was upset by Green’s “lot of holes” comment, saying he would let his pads do the talking on the field.

Less than 2 minutes later, Manning forced a throw that was picked off by Nate Clements. Dalton’s 10-yard touchdown to Mohamed Sanu made it 31-6.

NOTES: The home team has won every game in the series, which the Bengals lead 6-3. … Giants WR Domenik Hixon left in the first quarter with an ankle injury and didn’t return. … The Giants have forced turnovers in 39 of their last 42 games. They have 27 takeaways this season. … It was the first time this season that Dalton didn’t throw an interception. … There were nearly 9,000 unused seats at Paul Brown.

COLUMBUS (AP) — Late in the first half, with his team trying but failing to create any opportunities, Ohio State... read more