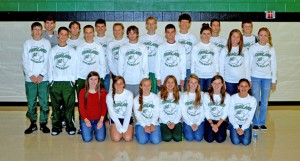 PROCTORVILLE — It was quite a run for this bunch of runners.

“We had a great season. The runners ran well but the competition was very tough at (the state) level,” said Fairland coach Chuck Wentz.

“We had some personal records set and most of the team was close to their best runs. I am so proud of the effort these student-athletes have put in this year. When you can get two district titles, a regional title and runner-up spot and two full teams at the state meet, it is a great year for Fairland cross country.”

Along the way, both teams won Ohio Valley Conference titles and district titles as well. The Lady Dragons won the regional title at Pickerington with the boys’ team finishing second.

There were other achievements off the course as well.

“We also had seven academic All-Ohio runners and that is what we strive for, great student-athletes,” said Wentz.

“Many of these runners will start their winter sport next week and others will take two weeks off then start running some winter runs and preparing for track season.”