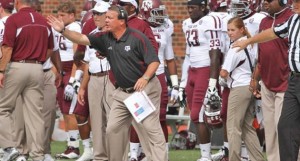 When Kevin Sumlin took his high-powered offense to Texas A&M, he knew he needed a strong defense as well to compete in the SEC. As the head coach at Houston, Sumlin went up against then-Marshall head coach Mark Snyder who is well known for his defensive wizardry.

Sumlin lured Snyder away from South Florida to take a similar position as defensive coordinator at A&M.

The two worked their magic last Saturday in a stunning 29-24 upset at No. 1-ranked Alabama.

“Kevin and I work together well. We talked about it. We always said if we could put this offense and defense together, we’d have something,” said Snyder who also was co-defensive coordinator at Ohio State during their 2002 national championship season.

The Aggies are 8-2 including 5-2 in the SEC Eastern Division, one game back of Alabama. They lost 20-17 to Florida in the first game of the season and fell 24-19 to LSU three weeks ago.

“We’re a work in progress,” said Snyder. “It took all spring and all (fall) camp to get everyone familiar with the system. We started slow but we’re playing at a high level now. They’re understanding the defense. They’re only going to get better.

The win over Alabama has brought the national media to the A&M campus hungering for more information about the program and freshman quarterback Johnny Manziel, a.k.a. Johnny Football.

Snyder said the win and all the attention will help springboard the program.

Snyder was an All-Ohio quarterback for the Ironton Fighting Tigers and helped the team to a Division III state runner-up in 1982. He later played safety at Marshall where he earned Division I-AA All-American honors when he set a school record with 10 interceptions in one season.

“I told the team that big-time players make big-time plays in big-time games. I remember coach Lutz and coach Burcham saying that and I’ve never forgotten it,” said Snyder.

Moving the College Station, Texas, was Snyder’s third home in four years. However, he said his wife, the former Beth Molter, and daughters Chelsea, Lindsay and Shaylee are enjoying their new home.

“It’s been good here. The family has adjusted well. It has a very homelike feeling. The girls have really adjusted,” said Snyder.