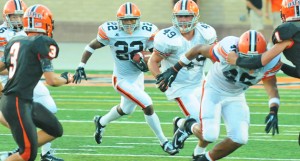 Some of the area’s best players during the regular season were honored in the postseason.

Lewis shared the offensive award with Piketon quarterback Trent Williamson who threw for more than 2,000 yards.

Lewis ran for 1,148 yards in the regular season and 17 touchdowns. He average an amazing 11 yards per carry.

Stephens averaged seven tackles a game, had five quarterback sacks and knocked down five passes. He also caught a team-high 16 passes for 240 yards and three touchdowns.

Not only was Vass in his first season as a head coach, he also had the task of following the legendary Bob Lutz who set a state record with 381 wins.

Vass guided Ironton to a 6-3 regular season and a postseason playoff berth against one of the toughest schedules for any Division IV school in the state.

The Chesapeake Panthers’ all-purpose offensive player and defensive back was named to the first team along with linebacker and offensive lineman T.J. McCoy. Running backs Jacob Collins and Nate Jones were special mention.

The Fairland Dragons had two players on the first team as running back and defensive end Tyree Ceasar and all-purpose player and defensive back Kyle Sowards were honored.

The Dragons wide receiver and defensive back Cody Midkiff and running back Nathan Campbell were special mention.

Quarterback and defensive back Alex Bare led the first team picks. Bare ran for 468 yards and completed 45 of 75 passes for 834 yards and seven touchdowns offensively. He had four interceptions and 40 total tackles as he made the squad on defense.

Running back and linebacker Kyle Estep was also on the first unit along with fullback and defensive end Brandon Hogsten and two-way lineman Austen Pleasants.

Rock Hill senior linebacker Shane Harper — who led the team in rushing on offense and tackles on defense — was named to the first unit in Division V.

The Symmes Valley Vikings were one of the dominant teams in Division VI.

The Vikings’ top players were running back Alec Herrell and defensive lineman Jacob Easthom, both earning votes for the district’s top player honors.

Also on the first team for the Vikings were defensive back D.J. Miller — he ran for 1,063 yards and 10 touchdowns on offense — linebacker Tyler Rowe and two-way end Austin Baldwin, an outstanding blocker on offense.

Buckeyes have no love for Badgers

The Associated Press   COLUMBUS — It used to be that Ohio State players despised their longtime enemies to the... read more