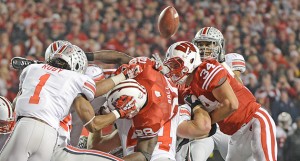 MADISON, Wis. (AP) — Ohio State clinched one title, and kept its slim hopes for another alive.

Ohio State (11-0, 7-0 Big Ten) is ineligible for the postseason as part of its punishment for NCAA violations under former coach Jim Tressel. The best the Buckeyes can hope for is to finish the regular-season unbeaten, then have the teams above them all lose at least once to give them a shot at playing spoiler for The Associated Press title.

“We have a saying, ‘A team that refuses to be beat won’t be beat,”’ Ohio State coach Urban Meyer said. “Somehow, someway.”

Wisconsin, meanwhile, blew its chance to show it deserves its spot in next month’s Big Ten title game. The Badgers (7-4, 4-3) are third in the Leaders Division, but they’ll be playing for a trip to the Rose Bowl because neither the Buckeyes nor Penn State are eligible for the postseason. No one else in the division will even finish with a winning record.

“I’m sure winning in Indy and going to the Rose Bowl and winning there would erase all the losses we’ve had,” Montee Ball said. “Because that’s our goal.”

At least the Wisconsin fans got to see Ball get the major college record for career touchdowns in his final home game. Or, part of the record anyway. Ball scored his 78th TD in the second quarter, tying the mark set by Travis Prentice of Miami (Ohio) in 1999.

But he fumbled what would have been the record-breaker with 2:46 left in regulation. Ball held the ball in front of him as he leaped over the pile on the goal line, and Buckeyes linebacker Ryan Shazier met him with both fists and punched the ball loose.

“That’s a dumb decision on my part,” Ball said. “But I just felt like I needed to get the ball in the end zone.”

And the Buckeyes felt just as strongly that they needed to keep him out.

“We knew that he needed two to break the record,” Shazier said. “We were not going to allow him to break it on us.”

Ball finished with 191 yards on a career-high 39 carries.

The Ohio State-Wisconsin rivalry hasn’t reached the heights of “The Game” between the Buckeyes and Michigan. But it is not exactly warm and fuzzy, either, especially not after the previous two games.

Two years ago, Wisconsin ended Ohio State’s hopes of a making a run at the national title, handing the then-No. 1 Buckeyes their first loss at Camp Randall. (Ohio State’s 2010 season was later erased by the NCAA sanctions.) Last year it was the Buckeyes stunning the Badgers, with Braxton Miller dancing around like a jitterbug before launching a 40-yard, game-winning heave with 20 seconds left.

Though there wasn’t any obvious chippiness Saturday, the brutal physicality of the game left no doubt the teams have begun to use each other as a measure. Wisconsin’s defense was downright nasty, limiting the high-powered Buckeyes to a mere 236 yards of offense, more than 200 yards below their average. The Buckeyes crossed the midfield only once after halftime, and the Badgers largely kept the dynamic Miller in check.

But Miller made plays when he needed to, and Hyde continued to impress.

“We’re certainly not a finished product on offense, and it showed,” Meyer said. “But to come down in that overtime. I think we need to give (Hyde) the ball a little bit more.”

After Ball’s goal-line fumble, the Badger defense came up with one more big stop, a quick three-and-out that ensured the offense would have good field position. It was the first two-minute drill for Curt Phillips, the third-string quarterback who was making his second start, and he got off to a rough start, sacked on the first play.

He settled down from there, though, converting a fourth down with a 14-yard pass to Jared Abbrederis and finding him for another long gain to set up Jacob Pedersen’s 5-yard scoring catch that tied the game with eight seconds left.

“Everybody kept the faith. We drove right down and scored,” Phillips said. “I was very confident going into the overtime.”

But overtime was all Buckeyes. Hyde ripped off a run of 11 yards on the first play and, two plays later, strolled virtually untouched into the end zone for the go-ahead score.

He also had a 15-yard scoring run in the second quarter, and finished with 87 yards on 15 carries. Miller was 10 of 18 passing for 97 yards, and had another 48 yards rushing. He also was sacked three times for a loss of 27 yards.

“We just wanted to pound the ball and give the ball to Carlos and let the O-line block for Carlos because we knew it was over,” said Corey “Philly” Brown, who returned a punt 68 yards for a score. “That O-line is something else. We don’t think there is any D-line that can stop them when you have a back like Carlos running the ball.”

The Badgers have a good back of their own, but the Buckeyes knew the game was theirs.

“We knew that if our offense scored, we were going to win,” cornerback Bradley Roby said. “The touchdown they scored (at the end of regulation) gave us motivation to win it in overtime.”

Ball gained 6 yards on Wisconsin’s opening play, but that was all the Badgers would get. Phillips threw an incompletion, Ball was hauled down for a loss and Bryant batted down a Phillips pass intended for Pedersen to end the game.

“We still have another game to go and obviously it’s the biggest one,” Brown said. “It’s our last, so we’re going to make it count.”