Pickin’ for a Cause kicks off first year 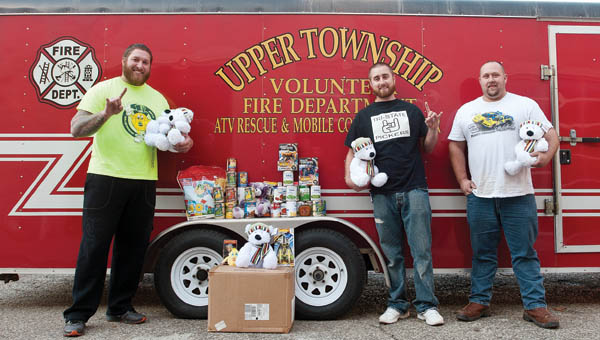 Jason and Justin Maddy, with Tri-State Pickers, along with Upper Township Fire Chief J.D. Pancake, pictured left to right, are asking for donations for a canned-food and toy drive for this upcoming holiday season.

In less than a year, Justin and Jason Maddy have gained more than 20,000 followers on their Tri-State Pickers Facebook page.

Now, they are hoping those followers will help their food and toy drive become a success.

Called Pickin’ for a Cause, the goal is to collect non-perishable food items and new toys so those in need can have a brighter holiday season.

This is the first food and toy drive effort for the pickers, but they are hoping the community will show its support.

Jason said he and the other Facebook site administrators have already gotten messages about people in need and they have already started compiling a list of names. Toys and food will be distributed using local food pantries and church organizations as well.

Saturday, the Maddys were stationed at the Upper Township Volunteer Fire Department, one of the item drop-off locations.

Chief J.D. Pancake said he has known the Maddys since they were in school together and wanted to get involved with the drive.

From noon to 5 p.m. each Saturday until Dec. 15, the Upper Township fire station on State Route 141 will be open for the public to drop off items.

Monetary donations are also accepted through PayPal by emailing tristatepickers@roadrunner.com