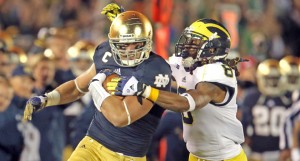 Two straight weekends of seismic upsets not only sent tremors throughout college football from the Deep South to the Pacific Northwest, they’ve all but cleared the way for two marquee teams and best-known brands to play for the national title.

Notre Dame was No. 1 in The Associated Press college football poll released Sunday and Alabama was No. 2 after a pair of stunning Saturday night upsets rearranged the rankings. When the BCS standings came out later Sunday, they lined up the same way.

Notre Dame needs only to beat struggling rival Southern California (7-4), with its star quarterback injured, to secure a spot in the BCS title game for the first time. In the 76-year history of the AP poll, Notre Dame has been crowned national champion by the media panel eight times, the last in 1988.

“It’s like being selected for the playoffs,” Notre Dame coach Brian Kelly said. “Now you know you’re in if you take care of business.”

The only other school with as many AP championships is Alabama. The Crimson Tide potentially has two more games left. The Tide is at home Saturday against rival Auburn (3-8) and, if it beats the Tigers, advances to the Southeastern Conference championship game against No. 3 Georgia on Dec. 1.

Win that one, too, and it will be Notre Dame and Alabama playing in Miami on Jan. 7 for the championship.

Sounds simple enough. But when it comes to college football, the last two weeks of the season have been a consistent reminder that it’s best to expect the unexpected.

Oregon and Kansas State were in the front row of the BCS race as of Saturday. All the Ducks and Wildcats had to do was win the rest of their games and they would have played for the BCS crown. No easy task for sure, but considering they had been walloping opponents, winning their first 10 games by an average of more than three touchdowns per game, it looked like a solid bet that they’d close the deal.

A week earlier, the same was said about Alabama — before it was upset at home by Texas A&M, a loss that cleared the way for Oregon to be No. 1 for the first time this season.

The Bears (5-5) ran out to a 28-7 lead behind Nick Florence, the quarterback who replaced last year’s Heisman trophy winner Robert Griffin III, and won 52-24. Not only did the Wildcats lose all hopes of playing for a national championship, its much-heralded quarterback, Collin Klein, lost his front-runner status in this year’s Heisman chase.

This was all wonderful news for Notre Dame, which was sitting at No. 3, had shut out Wake Forest earlier in the day, and needed only Oregon or Kansas State to lose to have a chance for the national title.

One down, one to go.

While Kansas State was lamenting its lost opportunity in Waco, Texas, over in Eugene, Ore., Stanford was pushing around the top-ranked Ducks as no opponent had this season. The Cardinal (9-2) tied up the score with 1:35 remaining in regulation on a touchdown pass that many Ducks fans likely will be seething over for years.

Tight end Zach Ertz caught Kevin Hogan’s pass, juggled it on the way down, landed on an Oregon defender, and rolled out of bounds. Incomplete was the ruling on the field. After video review, the call was overturned. TD Stanford, 14-all.

In overtime, Oregon missed a field goal try, Stanford made one, and the upset was complete: Stanford 17, Oregon 14.

If they listened hard, Stanford players might have heard the Alabama fans yelling and screaming from clear across the country.

Alabama wide receiver Amari Cooper tweeted as the dominoes were falling: “I don’t think I’ve ever been this excited before haha.”

The Crimson Tide wasn’t the only SEC team lifted by the upset, but Bama benefited most. A week after giving up control of the national championship race, the Tide is back in charge, looking for a third BCS title in four seasons. A win would be seven in a row for the Southeastern Conference.

If Alabama can get past lowly Auburn on Saturday, and Georgia can avoid a K-State-like loss to Georgia Tech (6-5), the Tide and Bulldogs game will essentially be a national semifinal, with the winner advancing to the BCS title game.

No. 6 Florida (10-1), another SEC team, has a chance now, too. The Gators play No. 10 Florida State (10-1) in Tallahassee on Saturday, and the Seminoles think they have a shot to reach the BCS title game as well.

Oregon slipped to No. 5 in the rankings, and probably believes it can still get a second chance, the way Alabama did, but time is running out. Same goes for No. 7 Kansas State.

A Notre Dame-Alabama BCS championship game would mark the first meeting between the storied programs since 1987, and the biggest since the 1973 Sugar Bowl.

That year, coach Bear Bryant’s Crimson Tide was No. 1 and Ara Parseghian’s Irish were No. 3 when they met in New Orleans. The lead changed hands six times and Notre Dame won it 24-23 and was voted No. 1 in the poll to win the national championship.

Now the question is: With two more weeks to go in college football’s regular season, can the Irish and Tide calm the chaos and set up what could be the most-hyped national championship game in history?

Let the game begin: Hoke coy about his QB