Robinson will shift positions against OSU 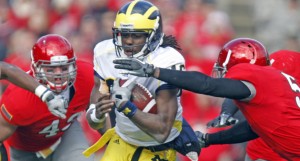 Shifting positions, Michigan quarterback Denard Robinson will be running out of the backfield as a running back or receiver when the Wolverines visit Ohio State in the season-ending rivalry on Saturday. (MCT Direct Photo)

ANN ARBOR, Mich. (AP) — Michigan’s Denard Robinson has electrified crowds and broken records as a quarterback. Now he’s winding down his college career in a way that could prepare him to play in the NFL.

When the 20th-ranked Wolverines wrap up the regular season Saturday at No. 4 Ohio State, he likely will see more time at running back or receiver than QB.

“I’ll do whatever it takes for the team,” Robinson said after helping Michigan beat Iowa 42-17 Saturday. “If I can go, I’m going to go and not hold back.”

Robinson was held off the field for two-plus weeks with nerve damage in his right elbow. The injury limits his ability to grip and throw the ball, but it hasn’t slowed down his fast-moving feet.

He lightly lobbed short passes more than an hour before playing the Hawkeyes, but he didn’t throw any long passes or deep outs when Devin Gardner did during warmups nor did he attempt a pass when he took snaps at QB during the during the last game.

Wolverines coach Brady Hoke, not willing to share any insights to help the rival Buckeyes, insisted Robinson could still start at quarterback in the Horseshoe.

Robinson stayed 100 percent committed to Michigan nearly two years ago when it fired coach Rich Rodriguez, who convinced him to join the Wolverines. Rodriguez was one of the few coaches that thought Robinson could make it as a QB in major college football.

Buckeyes coach Urban Meyer probably wishes Robinson, who is from Deerfield Beach, Fla., went elsewhere. When Meyer was at Florida, he recruited Robinson heavily and tried to convince him to stay close to home and play for the Gators.

“I have great respect for him as a person and as an athlete,” Meyer said. “He’s one of the finest athletes in America, so you’d better know where he’s at on every snap. I think he’ll probably be able to throw the ball well enough — I know they have something waiting. So we have to be ready for it.”

Ohio State is going to have to get ready for a lot of wrinkles when Robinson is in the game after getting a peek at the possibilities Saturday.

“You just know something’s coming,” Meyer said. “It’s a question of what.”

Robinson lined up behind and alongside QB Gardner against the Hawkeyes. He’ll do that again and probably will be split out wide as a receiver at times against the Buckeyes.

He got the ball on toss sweeps, handoffs and short passes. He also got a handoff and flipped the ball on an option to running back Fitzgerald Toussaint, whose left leg snapped and led to him having season-ending surgery.

Once, Robinson was used as a decoy to help Gardner throw one of his three touchdown passes because Iowa was concentrating so much on where Robinson was on the field.

“The attention he gets is amazing,” Gardner said.

It’s not amazing if you’ve been paying attention to college football the last four years.

Robinson ranks No. 1 at college football’s winningest program with 10,547 yards of total offense. He had a school-record 502 yards of offense at Notre Dame two years ago in his breakout performance and owns 10 of the top 11 games in terms of total offense by a Wolverine.

If he throws a TD pass at Ohio State, and a short one certainly seems possible, he’ll be the first player in Big Ten history to throw for 50 and run for 40 scores.

Robinson has just two more games in his college career before getting a shot to be a professional by perhaps making a transition from QB to receiver as former Indiana star Antwaan Randle El did a decade ago.

“It’s hard to put it into words what this means to me, being a leader on this team and one of the guys that was picked by the team to be captain is a great honor,” Robinson said. “It’s kind of hard to swallow right now because it’s coming to an end.”

COLLEGE PARK, Md. (AP) — Choosing to look toward the future rather than honor the past, Maryland joined the Big... read more