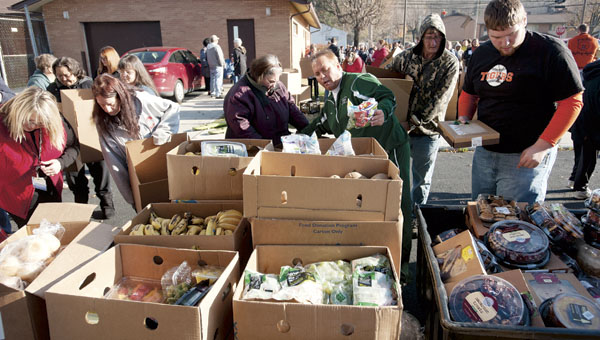 Volunteers gather at the Riverhills Community Building to help to hand out meat, fruits, vegetables, breads and desserts during a mobile food pantry giveaway Tuesday sponsored by the Huntington Area Food Bank.

Bundled in a thick blue parka, Harold Wilson waited in the biting cold five hours Tuesday before the food giveaway even began.

The 68-year-old from Ironton said he was the first in line at 5 a.m., his first time using a mobile food pantry.

“It’s my first go-round with this, but I figured I’d try it out,” Wilson said.

The Huntington Area Food Bank trucked in 7,000 pounds of food for its first mobile pantry giveaway in Lawrence County.

Volunteers from area high schools, the Family Guidance Center, Our Lady of Bellefonte Hospital, the Ironton Fire Department, Appalachian Family and Children First Council and other organizations helped to handout the food.

Wilson and others lined the sidewalks along Madison and South Ninth streets by the Riverhills Community Building. By the time registration started at 9 a.m., there were hundreds of people waiting in the line that stretched a block from the building.

“I need it,” Wilson said. “I think it’s a good thing. I’m on Social Security and I really appreciate it.”

Wilson and the others were given a box with a number on the front, representing the number of people in the family. Each person was given sliced lunchmeat, produce, sliced bread, rolls and dessert items.

“This makes a big difference for me,” Wilson said. “I appreciated each and everything I got today.”

Deborah Jones also got in line early for the giveaway and said the food was a blessing to her family of six.

“It means my family will eat this week,” she said.

Erin Highlander, interim director of development for the HAFB, said she was shocked at the turnout for the giveaway.

“It shows there is a need,” Highlander said. “Obviously we’re in the right place.”

It took about two hours for everyone to get through the line, just under 400 people. In total, 1,284 family members benefited from the mobile food pantry.

“Being this was the first one (in Lawrence County), we didn’t know what the turn out was going to be,” Highlander said. “This gives us a better idea of what to do next time.”

And there will be a next time, she said.

The BP/University Mart on Liberty Avenue in Ironton was once again the site of an armed robbery Tuesday. Ironton... read more