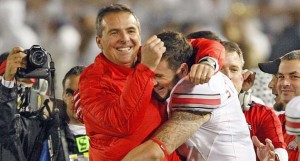 Ohio State Buckeyes’ wide receiver Jake Stoneburner (11) gets a hug from Ohio State head coach Urban Meyer as the game ends against Penn State earlier this season. Meyer is hoping to guide the Buckeyes to an unbeaten record in his first season as the head coach. The 11-0 Buckeyes host Michigan Saturday in their final game of the year. (MCT Direct Photos)

COLUMBUS (AP) — All that separates Ohio State from a season for the ages is a contest so big that everyone simply calls it “The Game.”

Just five teams in the program’s 122 previous years have gone through a campaign unbeaten and untied. The Buckeyes (11-0, 7-0 Big Ten) can become the sixth Saturday when they take on archrival Michigan.

Perfection is exceedingly rare, whether for a baseball pitcher, a pearl or a college football team.

“That’s the goal for every team. I mean, why not?” said former NFL and Ohio State All-American offensive lineman Jim Lachey, now a radio analyst for Buckeyes games. “Everybody dreams about that opportunity.”

Since the schools officially saved the best for last and moved their biggest game to the end of the schedule in 1935, Ohio State has carried a perfect record into the Michigan game 12 times, going 8-3-1.

Some believe that it is more difficult to run the table and win every game now than ever before, due to scholarship limits, spread-the-wealth conferences and even small schools getting a chance to appear regularly on television.

Just last week many experts already had Kansas State and Oregon in the national championship game, virtually conceding that they would win the rest of their games and put up unblemished records.

Instead, they both lost, leaving No. 1 Notre Dame and fourth-ranked Ohio State as the only major unbeatens left in the country.

“You saw last week with Kansas State and Oregon that it’s hard to do,” first-year Buckeyes coach Urban Meyer said. “It’s a credit to a bunch of players and assistant coaches who keep that focus in spite of all the distractions. It’s such a credit to this team to be in the position they’re in. It’s hard. It’s real hard.”

Ohio State, of course, is trying to preserve its perfect season. But is Michigan motivated by trying to ruin it?

Marcus Ray, a former Wolverines player who is from Columbus, knows a little bit about both sides of it. He played for the last unbeaten and untied Michigan team to beat Ohio State, in 1997. Coach Lloyd Carr’s team went on to win The Associated Press national championship.

Ray also played strong safety on teams that twice demolished perfect seasons by Ohio State, the Buckeyes’ second-ranked squads that were 11-0 in 1995 and 10-0 a year later.

“It heightens the stakes and makes the game more entertaining to watch because it adds more fuel to the fire,” Ray said of having an undefeated team in The Game. “It works against the undefeated team in a rivalry game. If you win, you were supposed to win. If you lose, your rival can say they knocked you off your high horse.”

“It doesn’t, to be honest with you,” he said. “If you need anything to get amped up more for this football game, then you don’t know college football and you don’t understand the importance of this great rivalry.”

Earle Bruce succeeded the legendary Woody Hayes as Ohio State’s head coach in 1979 and guided his first team to 11 consecutive wins, including a win over Michigan, before losing the national championship by a point to Southern California in the Rose Bowl.

A team that’s hoping to make a name for itself by ruining its adversary’s faultless record is misguided, he said.

“If that’s the case, they’re doing it the wrong way, aren’t they?” he said. “You do it for the good of you, not the detriment of someone else. That’s not good focus.”

Michigan’s fifth-year senior center Elliott Mealer, an Ohio native, believes too much is made of the ancillary things off the field.

“I don’t think there’s any way to raise or lower the bar for this game,” Mealer said. “It’s always important, it’s always intense.”

If the rivalry takes on even more relevance for Ohio State’s players this season, it’s because it’s their final game. NCAA sanctions for violations committed under former coach Jim Tressel include a bowl ban. So, with no chance to play in the Big Ten title game, the BCS national championship or any postseason game, there is little left except to maintain perfection.

Asked what a 12-0 mark would mean — particularly coming on the heels of an embarrassing 6-7 record including a Michigan loss last year — senior linebacker Etienne Sabino had difficulty answering.

“I don’t know if words can (express it),” he said. “Every year you set out to win every game. That’s your goal. That’s the dream for every athlete in every sport. To have a chance to do that … We’re 11-0 with one game in front of us. If, at the end of this game, we can do what we’re supposed to do it’s going to be amazing.”

It’s been 33 years since Bruce’s No. 2-ranked Buckeyes took on No. 13 Michigan on a bright but cold day at The Big House.

It seems like just last week to the 81-year-old, as all of the memories from that cherished 18-15 victory come flooding back. Jim Laughlin’s blocked punt. Scoring a touchdown against the maize-and-blue for the first time in four years. Climbing to No. 1 in the polls. Clinching a berth in the Rose Bowl.

“Those are the things I remember,” Bruce said softly.

Perhaps in time such reflections matter. Right now, for those involved, there are more fundamental things to worry about: stopping the run, no mistakes in special teams, reining in the emotion and doing your job.

“I’ve been coaching for a while now, and there’s nothing you can control other than getting ready to go play the game,” Meyer said. “You learn that along the journey. If it was the first rodeo, I’d be worried about this, worried about that.

“I am concerned, but you’ve got to move forward and do the best you can.”