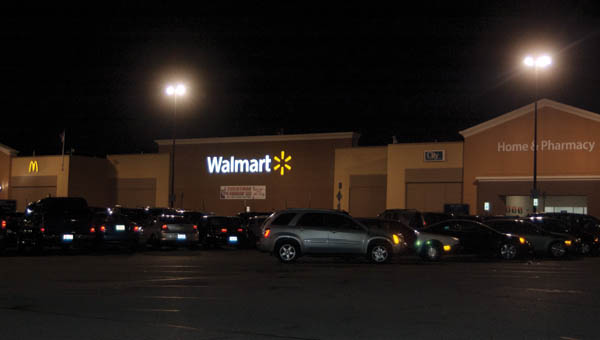 Cars come and go at the parking lot at the Walmart at Ashland, Ky., during Black Friday sales.

At 3:30 Thursday morning the food court at the Ashland Town Center Mall looked like high noon on any other business day as most tables were filled with shoppers breakfasting on slices of pepperoni pizza, subs and soft drinks.

The line in front of the PretzelMaker was seven deep and almost as many were at the nearby Great American Cookie, though some seemed more were interested watching an employee squeeze an icing design on a 8-inch wide pastry.

Within an hour the food court was almost deserted, a ghost of the scene Black Friday bargain hunters had found when the mall opened at midnight for the first day of Christmas shopping.

“There were so many people,” Breanna Ison of Ashland, Ky., said. “You couldn’t get through. It was like sardines. It is starting to calm down. We’re just waiting for the other stores to open, just taking a break.”

The aroma of tomato sauce and garlic wafted down the main concourse as shoppers darted in and out of specialty boutiques or crashed for a few moments of rest on benches showing off the buys they had found to their friends.

Cathy Fraley of the mother-daughter cottage business, CJ and Nani’s Neck Candy, was adjusting some of the jewelry-laden scarves she produces at one of the kiosks that serves as her makeshift store. She described the crowd when the mall doors opened as mayhem with a mission.

“People were running to their destination,” she said. “It was pretty wild, like a big slumber party. By 3 it had died down. Now there are more shoppers, not the teens.”

Early Bird Bargains were advertised throughout Belk like fine jewelry discounted 55 to 70 percent. Every so often Louie Armstrong singing “Zat You, Santa Claus” on the PA system would be interrupted as another blockbuster sale was announced.

Redonda Thornton of Columbus visiting for the holidays had started her present-buying spree at Target at the Huntington, W.Va., mall at midnight before coming down to Ashland. However she called this year’s Black Friday a disappointment.

“Half of the stores aren’t open and there is not the hustle and bustle,” she said. “It is like any other day. We didn’t even stand in line. There is no Christmas music.”

Lura Mills of Ashland was sharing a bench in front of J.C. Penney’s with Jessica Craig of Olive Hill, Ky., waiting for the anchor store to open at 6 a.m. Both had shown up before midnight and stood in a line that stretched a block long waiting for the mall to open.

“People were waiting to get in, just to get in the front door,” Mills said. “It was a big line.”

They were surprised that the big retailer wasn’t joining in the early Black Friday hours.

“There were thousands of people then,” Craig said. “People could have been shopping there.”

With about an hour and a half left to wait, the pair were already planning their next shopping forays.

(AP) — This year’s Black Friday shoppers were split into two distinct groups: those who wanted to fall into a... read more