Playing to Perfection: Buckeyes use strong 2nd half to beat Michigan, complete 12-0 season 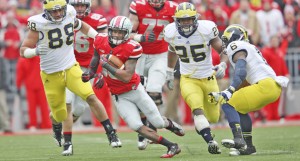 COLUMBUS — The only thing Urban Meyer lost during his first season at Ohio State was his cool — at the end of the last game.

Carlos Hyde ran for 146 yards and the fourth-ranked Buckeyes’ defense shut out No. 20 Michigan in the second half to grab a bruising 26-21 win on Saturday, completing an improbable 12-0 season for the Buckeyes.

Meyer got emotional as the final seconds ticked off, embracing his players on the floor of a raucous Ohio Stadium. Too emotional, he said later.

“I’ve got to keep a little more composure, I guess,” he said sheepishly. “In the coaching manual, I think it’s chapter 13, it says, ‘Keep cool.’ I lost it there for a couple of minutes.”

Well, give the guy a break.

Almost no one — up to and including Meyer — expected such a rapid turnaround for the Buckeyes, who were just 6-7 last season with a loss to their archrivals in a transitional year when they were facing heavy NCAA penalties. A month after Meyer took the job last November, they were socked with a bowl ban after this season — and still ran the table.

Ohio State (12-0, 8-0 Big Ten) is ineligible for a BCS national title but still has an outside shot at finishing No. 1 in the final Associated Press Top 25 if other contenders lose. Michigan (8-4, 6-2) will now await a minor bowl bid.

“At this point in time, Ohio State can go and play with anybody in America,” Meyer said.

“I wouldn’t say that five weeks ago, but you’ve seen the growth, what we did today and the growth of our defense.”

Drew Basil matched his season output with four field goals and the defense did the rest, forcing three turnovers in the second half.

It was played before 105,899, the largest crowd ever to witness “The Game” in Columbus.

Meyer and his players were mobbed by thousands of fans who flooded the field after the Buckeyes’ ninth victory in the last 11 years in the rivalry (the 2010 win was later vacated by the sanctions).

“It’ll go down as one of the great teams in Ohio State history,” Meyer exulted.

Hyde also ran for a touchdown. Braxton Miller completed 14 of 18 passes for 189 yards and a score to Corey Brown, who had eight catches for 95 yards.

The Buckeyes had already clinched the Big Ten’s Leaders Division, but aren’t allowed to play in next Saturday’s conference title game. Michigan needed a win to capture a share of the Legends Division with Nebraska, which will meet Wisconsin for the championship.

“I like the W better,” said Hoke, who won his debut in The Game a year ago.

Now, about Ohio State can hope for is every other top team in the nation — including the only other unbeaten, top-ranked Notre Dame — to lose and lose badly in the coming weeks. A team banned from the postseason has never finished No. 1 in the AP Top 25 poll, and the Buckeyes are not eligible for the Bowl Championship Series rankings or coaches’ poll.

Michigan’s Denard Robinson had a brilliant first half, scoring on a 67-yard run, but was largely invisible in the second. He totaled 122 yards on 10 carries, but had lost 2 yards on his four carries after halftime.

“We know the reason we lost the game,” Robinson said. “We had three turnovers in the second half. That’s not acceptable.”

Devin Gardner, the other half of Michigan’s quarterback tandem, was 11 of 20 for 171 yards with an interception and a 75-yard touchdown pass to Roy Roundtree.

For the Buckeyes, the game will be remembered for the staunch defense played when most needed. Michigan had 26 plays for 219 yards in the first half, then ran 21 plays for a net of 60 yards in the second.

For the Wolverines, there will be lingering questions for Hoke, who wore short sleeves in the freezing temperatures — just like Woody Hayes used to during the 1960s and 1970s in the rivalry.

With his team ahead 21-20, Hoke called timeout on fourth and 2 near midfield on Michigan’s first possession of the second half. Robinson then tried the middle, but ran into linebacker Ryan Shazier for a two-yard loss.

That cost the Wolverines the lead as Ohio State drove to the Michigan 11 before settling for Basil’s 28-yard field goal, putting the Buckeyes up 23-21.

“We’ve got to have each other’s back,” Hoke said. “We didn’t get it and (our own) defense went out there and did a nice job.”

Gardner fumbled when hit by Johnathan Hankins with 8:19 left, with Travis Howard pouncing on the loose ball after several players had a shot at it. Taking over at the Wolverines’ 10, the Buckeyes could not move the ball and were forced to settle for Basil’s fourth field goal of the game, a 25-yarder with 6:26 remaining, for a 26-21 lead.

Basil came into the game just 4 for 6 on the year.

Gardner tossed a floater that was intercepted by C.J. Barnett, ending the Wolverines final threat as Hyde carried the ball repeatedly and the Buckeyes played keep-away to the finish.

Between the first and second quarters, Ohio State honored its 2002 national championship team. After a highlight clip was shown to a roaring crowd, several players hoisted coach Jim Tressel to their shoulders and carried him out of the end zone.

No boos were heard, or else they were drowned out — even though it was Tressel’s NCAA violations, he failed to report players exchanging team memorabilia for cash and tattoos, which will keep this year’s unbeaten Buckeyes home in the postseason.

Asked if — should his team end up as the only unbeaten in the nation — it should be crowned No. 1 in the AP poll, Meyer said:

“I’m not going to get into the ‘what ifs.’ You can’t control what you can’t control. … We’re 12-0 and I’m going to see to it when you walk into that Woody Hayes (practice) facility that this team will never be forgotten. Because they deserve that.”