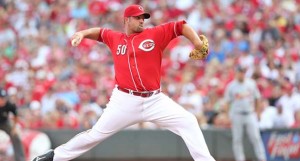 CINCINNATI (AP) — Reliever Jonathan Broxton is having “substantial talks” with the Cincinnati Reds about a multiyear deal, a person familiar with the negotiations said on Monday.

Broxton also is talking to several other teams, looking for a good fit for the next few years, said the person speaking on condition of anonymity because no deal has been reached.

The Reds got Broxton in a trade with Kansas City last July to solidify their bullpen. He became a free agent after going 3-3 with a 2.82 ERA and four saves in six chances for Cincinnati. Broxton had 23 saves in 27 chances with Kansas City before the trade.

Broxton’s priority is a multiyear deal with a team that would use him in a set-up or closer’s role, said the person familiar with the talks. He’s hoping to have an agreement with a team this week.

By signing Broxton, the NL Central champions could move left-hander Aroldis Chapman and his 100 mph fastball back into a starter’s role. They had planned to give him a chance to win a spot in the rotation during spring training, but closer Ryan Madson tore a ligament in his pitching elbow and needed reconstructive surgery.

Manager Dusty Baker eased Chapman into the closer’s role and got sensational results. Chapman, who had never closed games in his career, saved 27 consecutive chances and was 38 of 43 overall in save opportunities with a 1.55 ERA in 68 appearances.

Broxton moved into the closer’s role in September when Chapman developed a tired shoulder, saving all of his four chances.

The 28-year-old Broxton missed most of the 2011 season with the Dodgers because of a bone spur in his elbow that required surgery. He agreed to a $4 million, one-year deal with Kansas City last season, starting as a set-up man for closer Joakim Soria. He assumed the closing role in March, when Soria had to have reconstructive elbow surgery.