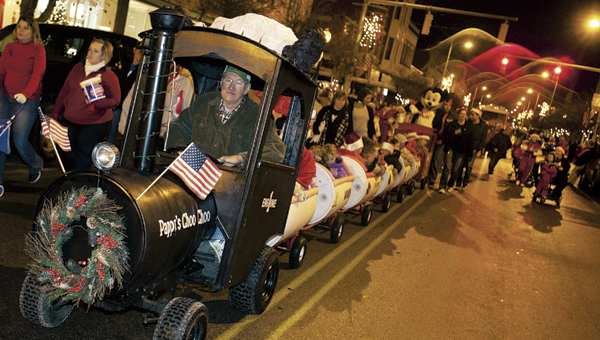 Hilda Massie was skeptical to say the least when last summer her husband, Jerry, informed her of his plan for his latest creative endeavor.

“My husband was sitting at home one day and said, ‘I’m going to make a train,’” Hilda recalled. “I thought you have flipped your mind.”

But Jerry and his sons, Jerry Jr., Ron and Don put their ingenuity together to create Pappy’s Choo Choo, which made its first appearance Monday night at the Ironton Lions Club’s annual Christmas parade.

Using plastic barrels for cars and a lawn mower engine in the cab, the Choo Choo was filled with the Massies’ great-grandchildren, plus a crew from their church, the Hanging Rock Community Church.

His reason for building the train fit the spirit of the holiday parade.

And children, and children at heart, lined the sidewalks of downtown Ironton for the 45-minute parade as fire trucks, floats, dancers and high school bands marched through the streets.

This was the third year for Holli Rose to join the dancers from Yvonne DeKay’s studio, all decked out in pink velvet elf costumes.

“It is great,” she said. “You get to see the community and be a positive role model.”

Carl Collins of Coal Grove has come out every year for the past 10 to show off his 21-foot-long 1976 Pontiac convertible covered in twinkling Christmas lights.

“I never miss the parade,” he said. “I just like everybody hollering ‘That’s a beautiful car.’”

Patty Freeman, Ironton High School guard instructor, marched along side her students as they performed to a medley of arrangements of the “Jingle Bells.”

“This is to share the music and the joy,” she said.

Church walk a tradition for the holiday season

For many in Ironton the Christmas season isn’t official until it is time for the annual Church Walk, sponsored by... read more