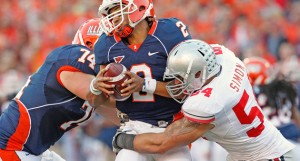 PARK RIDGE, Ill. (AP) — Penn State head coach Bill O’Brien on Tuesday was named the Big Ten’s coach of the year, earning allocates from fellow coaches and the sportswriters reporting on the conference.

O’Brien led the Nittany Lions to an 8-4 record, going 6-2 in conference play. His eight wins are the most by a first-year Penn State coach. Six Penn State players obtained first-team All-Big Ten status under his coaching.

“This is a fantastic honor; it’s very humbling,” O’Brien said in a statement. “Any time you are named coach of the year, it has a lot to do with two groups of people — it’s your coaching staff and obviously your players.”

Miller, who averaged 275 yards in total offense per game, rushed for 1,271 yards this season, ranking him second in that category in conference record books.

“I’m grateful for this moment and this honor,” Miller said. “And I am very thankful for the coaches we have and for their working so hard with us.”

Simon started 37 consecutive games for the Buckeyes before a knee injury sidelined him for the final game of the season, a 26-21 win over Michigan.

The defensive end called his honor a team award, crediting the play of his defensive teammates.

“I praise those guys for helping me get this and that is what it is all about,” he said.

He was tied for fourth in the conference with three forced fumbles.

“It feels good,” Barnes said of the honor. “But I am looking forward to next season. I need to play better than I did this year.”