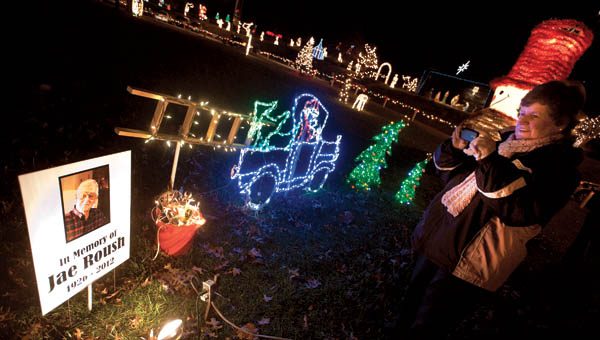 COAL GROVE — A twinkling blue pickup truck piloted by Santa Claus with a wooden ladder sticking out of the back and a bucket of tools in tow is the newest addition to the Paul Porter Park Christmas display.

But to the folks who knew Jae Roush, the scene is more than just a decoration.

“He always used his truck to load all the scenes in,” said Vicki McDaniel of the late Hayward Jae Roush, who died Oct. 21 at the age of 86. “It went places I never thought it could go.”

McDaniel, president of the Coal Grove Betterment Club, unveiled the display dedicated to Roush Wednesday evening, and there probably wasn’t a more fitting way to honor the man who, she said, spent countless hours replacing bulbs and repairing Christmas displays each year.

“No matter what happened, all (Mayor Larry McDaniel) had to say was ‘Jae, I need some help’ and he would be right there,” McDaniel said. “He just loved it. He couldn’t wait to get started at Christmas time.”

“It’s beautiful,” said Linda Waddle, one of Jae’s daughters. “Dad would have laughed if he saw this.”

Jae’s other daughter, Kelli Vanderhoof, made the trip from Nebraska for the dedication.

This was the first year in many that Jae, a Betterment Club member, hadn’t helped with the set up, and McDaniel said it was difficult this year without him. With broken displays and burnt out bulbs, McDaniel said her first instinct was to go find Jae.

“I did that four or five times,” she said.

Many member of the betterment club members are older and can’t help set up the displays, McDaniel said, and Jae was always there. Tim Collins and J.D. McDaniel from Judge O. Clark Collin’s work program also helped set up displays this year.

More than just work on the Christmas displays, Roush was a man who worked behind the scenes in Coal Grove in anyway he felt he was needed.

“When he saw a need, he just fulfilled it,” Vanderhoof said.

Roush’s son, Fred, said his father was always involved in his children’s lives as well as had a strong desire to give back to his community.

“He didn’t want the accolades,” Fred Roush said. “He lived a very full and productive life. He was all about the give-back.”

He was also instrumental in creating Paul Porter Park, which was just a football field before he and other community members recreated the space.

Bob Self, a village councilman and close friend of Roush, remembers back in 1989 when the project began. He, Roush and the late Glen Markins, former mayor, started with a stage and it grew from there.

“He helped build this park,” Self said. “He was very proud of it too.”

Self said even though the traditions of decorating the park continue on, Roush’s dedication will be missed.

“It’s not going to be the same,” he said. “This is to honor Jae for the fine fellow he was.”

Now that “Black Friday / Thursday” is over, and “Cyber Monday” has passed, the idea of “Giving Tuesday” has come.... read more