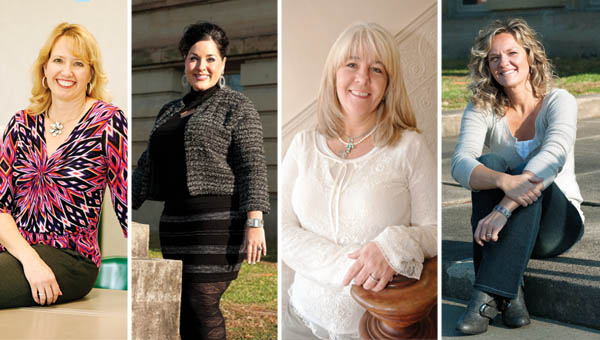 Political wives talk about how they cope, campaign and care for their families

Juli Brazzell was a student at Lipscomb University at Nashville when the slim, blonde Tennessean with the non-stop smile met the man who would give her a new name, a new hometown and a new career.

That’s when Juli met Jason Stephens of Proctorville, fell in love and said yes to his marriage proposal with dreams of living the life of a wife and mother, married to a successful southern Ohio businessman.

“He was a finance major and was working with finance and that type of thing and business,” Stephens said about her husband.

That imagined scenario for her future changed in a second when Jason said the fateful words, “I want to run for county commission.”

A daunting prospect for Juli? Not at all, she said.

“I was all for it,” she said. “I am a pretty competitive person too. I knew it would be a crazy ride but I was up for it.”

Jason Stephens was 28 when he ran for commissioner the first time 13 years ago. That election he lost. The next time he achieved his goal, staying on commission for 10 straight years until 2010 when he ran for and won the seat of Lawrence County Auditor.

To get that first job as an officeholder and winning all the other elections meant asking many of the 60,000-plus registered voters in Lawrence County for their vote each time. So that competitive spirit of Juli’s got a good work out as she went door to door or made cold calls, telling strangers why her husband was right for the job.

“That is fun for me,” Juli said. “I enjoy getting out and talking to everybody. But it is very time-consuming.”

Those early months of campaigning gave Juli more than a miscellany of war stories to tell. They were a run-up to what it is like to be a politician’s wife.

“His job is not paid by the hour. It is his job to meet those people, to be in the parades. … It is not sitting in the office, which most people think that it is. It is going to ball games and being asked about the property value of their house. You can’t go eat at Bob Evans without people asking questions about their taxes.”

Understanding, patience, flexibility and a tough skin when everybody doesn’t think your husband is the Prince Charming you do are all characteristics the wife of a politician needs to survive, say four Lawrence County women who have spent varying amounts of time in the trenches of local politics.

Three are married to men serving in Lawrence County government; the fourth is part of the municipal scene as wife of the mayor of Ironton. All recently shared how they see the job description of a politician’s wife, that sometimes most reluctant of public figures.

‘Not part of the contract’

Bethany Hayes met her future husband, Freddie Hayes Jr., 12 years ago through a mutual friend. At that time Freddie was a businessman running a chain of restaurants, a Tri-State produce operation and a private water company.

But Freddie wanted more challenges. So in the spring of this year he made the decision to add to his resume Lawrence County Commissioner, seeking appointment to the commission following the death of incumbent Paul Herrell. It was a decision Bethany hadn’t counted on.

“This wasn’t part of the contract,” Bethany said about getting into political life. “But sometimes you get things you don’t expect. But I am a stand-by-your-man kind of woman. Whatever Freddie wants, I will support.”

While the appointment to commission was made by 40 or so members of the Republican Central Committee, not a countywide election, this fall Hayes had to run for real to keep his post. Another challenge, but Bethany knew the tougher the battle, the harder her husband would fight.

“Everything Freddie has done has always been a challenge,” she said. “He likes stuff everybody thinks he can’t get. If somebody pressures Freddie to say he can’t do it, he will go at it 100 percent. It was bred into him and there is no stopping him.”

A self-described extrovert, the raven-haired Bethany jumped onto the campaign trail with equal enthusiasm.

However, what is normal for most is not normality for someone who has chosen to serve the people.

“They want answers and they want it now and it doesn’t stop,” Bethany said. “But with Freddie and all of his jobs, the phone is always ringing. With the water company, you can be lying in bed at 2 a.m. and the phone will ring with somebody whose water goes out or a pipe breaks.

“My life has always been busy, go, go, go. I haven’t really had to cope. I know at the end of the day everything will be OK. The only thing to cope with is when you have the people who are disrespectful. As far as coping I don’t think I’ve ever had to.”

Married for about eight years, Carla Blankenship and her husband, Ironton Mayor Rich Blankenship, were sharing the same concerns for their hometown but they didn’t know it. Not until Rich decided to take the plunge into political life full-time, upping his career as an Ironton City Councilman to take the lead administrative job.

“It was kind of weird but I had a real burden for the city and the people,” Carla said “I prayed and prayed for a Godly leader for this town. All of sudden he comes to me and says ‘I think I am going to run for mayor.’ I didn’t think it would be in my own house.”

While as a councilman in his second term, Rich was already in politics, it was an after-hours job from his work at the Department of Job and Family Services. Now as mayor, it became a full-time job that could last four years, maybe four more, but that would be it.

“I was kind of scared with it having term limits,” she said. “But it was something he was passionate about.”

With Carla working in the county juvenile court system and Rich already a known commodity, campaigning wasn’t as bad as it might have been for a first-timer. In fact it was a treat for their twins whom Rich took along in a wagon as he went door to door.

“They got a kick out of that,” Carla said. “I did some walking, phone calling. Most of the calls I made were to people I knew. The stress is probably the worst part, not knowing, being in limbo about what life holds for you. That is very stressful, but more for him than me.

“The hardest part for me is his missing the kids’ school programs and ball games and their saying ‘Why isn’t Daddy here.’ I won’t lie. That is his job. But you adjust. I kind of take the extra load, the hard times when the kids would question. We would always tell them that is what Daddy does. He helps a lot of people and gets a lot accomplished. But they are 12.

“When you go to dinner and out somewhere there is always somebody, even at church, when they see you they want to take the opportunity to say what they want to say or the question that is on their mind. Rich will say ‘Give me a call or come to the office.’ He handles that really well. If that were me, I don’t know what I’d do. It is constant. A lot of people don’t realize there are 500 other people who want an answer to their question. They don’t understand there is family time. But that is all right.”

There is nothing 9 to 5 about life on a dairy farm. A fact Stephanie Pratt learned minutes after she married Chesapeake dairy farmer Bill Pratt 15 years ago.

“The day we got married, he said he had to go home and milk the cows,” Stephanie said “After being married to a dairy farmer I don’t think it could get any more rough. He would go out at 6 in the morning, come in in the afternoon for a little bit, and start back out and not come in until midnight.”

So Bill’s decision to go into the demanding realm of politics, first as a Chesapeake school board member and later as a Lawrence County Commissioner, didn’t really faze his wife.

“I wasn’t shocked,” she said. “He had mentioned it before. He had always been interested in politics. It didn’t shock me one bit. I wasn’t thrilled but I knew he would be good at it. I do enjoy it. It is new to me. I wasn’t raised in politics, but I am learning.”

However switching from farmer to commissioner did put one concern on Stephanie she never had before.

“The only thing is I never had to worry what he put on when he went to work,” she said. “It didn’t matter. Now I have to make sure he looks good, get his clothes ironed.”

With four children ages 12 to 7 years old, Stephanie’s role in the campaign has been as a mother while Bill hits the trail.

“With four kids it is hard to do anything besides taking care of them,” she said. “I didn’t get to help him a whole lot. I tried as much as possible. I just do what I have to do. I understand his job. He does what he has to do. I can’t complain because he is a great husband.”

Like her fellow political wives, Juli Stephens has found the unanticipated experience of politics one of personal growth as well as the chance to support those she loves.

“I always wanted to be a wife and mother and take care of kids, be there for all of their activities,” she said. “This has given me so much more opportunities to meet other people and to do so much more for the community. You’ve got to love people. Politics brings so much to our lives. It is a bunch of fun.”