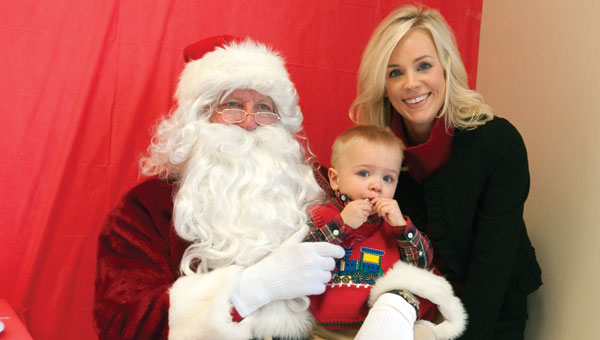 Nineteen-month-old Ryder Guthrie and his mother Cari Finley visit with Santa during the annual Kiwanis Pancake Breakfast. with Santa event Saturday in Ironton.

Everyone one knows the jolly man only eats cookies and milk, right?

Bette Backus chuckled as she recalled her nephew’s question. Backus is the vice president of the civic group, and for her, the answer is easy.

“The focus of Kiwanis International is serving the children of the world,” she said. “It’s something special for the kids.”

Saturday marked the 10th annual Breakfast with Santa hosted by the local Kiwanis Club. By about 10:30 a.m., volunteers had served up about 20 pounds of pancake mix.

Secretary of the club, Mary Roush, said the crowds hadn’t stopped since the breakfast began at 9 a.m.

“We seem to be growing each year,” Roush said. “People find out about it every year and then they expect it.”

In addition to fluffy pancakes and sausage, children were able to get some face time with Santa, while their parents got a free snapshot of the moment.

Robert Bump of Ironton said the Breakfast with Santa event is a tradition for him and his children.

“I do this every year,” Bump said. “It’s good to support the community. I think everyone should.”

Donning their own Santa hats, Bumps’ children, 6-year-olds Austin Bump and Caidience Malone waited for their turn with Santa. Austin was ready to ask Santa for Batman’s Bat Mobile.

“And it’s going to have a bad guy on it,” Austin described.

Caidience went big with a request for an iPod.

Farther back in the line, 3-year-old Abby Dean waited in line with her grandmother Rachel Adkins and little brother Hunter.

The visit to Santa was a surprise, Adkins said while Abby bounced up and down, ready to ask for a Barbie castle.

The Breakfast with Santa event is the biggest fundraiser for the local Kiwanis club, Backus said. Last year, the breakfast brought in about $400, she said.

The money raised goes to fund various community projects, including a scholarship for a Lawrence County high school senior, Tools 4 School, Christmas with Dignity, diapers and formula for the health department, health kits for the school nurses to give to needy students and donations to food pantries.

“We try to use our funds locally,” Backus said.

Backus also invited others to join the civic group.

“We are a small, informal club but we do a lot of good,” she said.

The Kiwanis Club meets at noon on Thursdays in the Ironton City Center.

Dog tags on sale through January 31