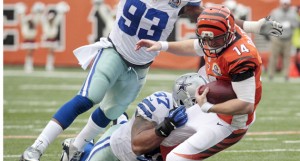 CINCINNATI (AP) — Numb. Grieving. Distracted. The Cowboys were all those things on Sunday, dealing with the death of one teammate and the tribulations of another.

Dan Bailey kicked a 40-yard field goal as time ran out, sending the Cowboys to a 20-19 victory over the Cincinnati Bengals that ended a tough afternoon with a little bit of relief and their playoff chances enhanced.

Didn’t last long, though. There will be a lot more emotional days ahead in Dallas.

“It’s a hard, hard situation we’re in,” quarterback Tony Romo said. “There’s no playbook for this sort of thing in life.”

The Cowboys overcame a nine-point deficit in the closing minutes behind Romo, who held his hand over his heart during a moment of silence to honor teammate Jerry Brown before the kickoff. The linebacker died in an auto accident early Saturday.

Defensive lineman Josh Brent, who was driving, was still jailed in Texas on Sunday, charged with intoxication manslaughter.

The Cowboys (7-6) learned about Brown’s death on their flight to Cincinnati on Saturday. Coach Jason Garrett told his team that the best way to honor him was to play well in a game with playoff implications for both teams.

One of the visitors’ metal lockers at Paul Brown Stadium had a strip of white athletic tape with “53 JERRY BROWN” attached to the top, a wooden stool inside sitting upside-down. Brown’s No. 53 jersey was on the sideline during the game — defensive tackle Jason Hatcher held it up after Bailey’s kick decided it.

It wasn’t much of a celebration by an emotionally spent team.

“I don’t remember crying this much other than maybe the day I was born,” defensive lineman Marcus Spears said. “With Josh’s situation and Jerry being gone, you felt it.”

Players couldn’t keep the tragedy out of their thoughts during the game, finding their minds wandering on the bench.

“I rarely let my emotions get the best of me,” fullback Lawrence Vickers said. “Today they did, but this was the place to do it.”

Owner Jerry Jones described his team as grieving when it took the field. It was the second consecutive week that an NFL team was playing a day after losing a teammate. Kansas City beat Carolina 27-21 one day after linebacker Jovan Belcher shot his girlfriend and then himself at the Chiefs’ practice complex.

When Bailey’s kick ended it, the Cowboys had a lot of thoughts racing through their heads.

“It was a very — and still is — a very difficult thing that this football team is dealing with.”

The Cowboys salvaged the game by scoring on their last two drives against the Bengals (7-6), who had won four in a row and had a chance to move into position for an AFC wild-card berth with a victory.

Romo threw a 27-yard touchdown pass to Dez Bryant with 6:35 to go. Anthony Spencer’s sack of Andy Dalton forced a punt, and Romo completed four passes on the drive to Bailey’s winning kick.

Romo finished 25 of 43 for 268 yards with a touchdown, an interception and three sacks. DeMarco Murray converted a third-and-5 play to extend the final drive and ended up with 53 yards on 21 carries.

Newcomer Josh Brown kicked field goals of 25, 33, 25 and 52 yards for Cincinnati, which wasted an opportunity to move ahead of Pittsburgh for the second AFC wild card.

“They came here in an emotional situation, and you knew they were going to fight all the way,” Bengals offensive tackle Andrew Whitworth said. “That game meant a lot to them. They played great.”

Dallas played a sloppy game until the closing minutes — nothing out of character there — and had a few especially bad moments.

Defensive coordinator Rob Ryan went onto the field and yelled at a Bengals player who had said something to the Cowboys bench, drawing an unsportsmanlike conduct penalty on Dallas in the third quarter. Dallas also was penalized for 12 men on the field during the drive, which ended with Brown’s third field goal and a 16-10 Cincinnati lead.

In the end, a defense that has allowed only three touchdowns in the last four games couldn’t hold on. And the Bengals made it tough on themselves by using all three of their timeouts early in the second half, leaving them unable to stop the clock on Dallas’ final drive.

Dalton was 20 of 33 for 206 yards with five sacks, one touchdown and an interception that Brandon Carr returned 37 yards to set up Murray’s 1-yard touchdown dive in the second quarter.

NOTES: Bailey’s game-winner was his second of the season. His 38-yarder beat Cleveland in overtime. It was Bailey’s sixth game-winning FG, second in Cowboys history behind Rafael Septien’s seven. … Bryant caught four passes for 50 yards, leaving him with 1,028 yards for the season. It’s his first 1,000-yard receiving season and the first by a Cowboy since 2009 (Miles Austin and Jason Witten). … Bryant has caught a TD pass in five straight games, the longest streak of his career. … Romo’s 25 completions gave him a club-record 349 for the season. He completed his last 12 throws the previous game and his first five on Sunday, setting a club record with 17 straight completions. … Bengals RB BenJarvus Green-Ellis ran for 89 yards on 12 carries, breaking his streak of three straight 100-yard games.